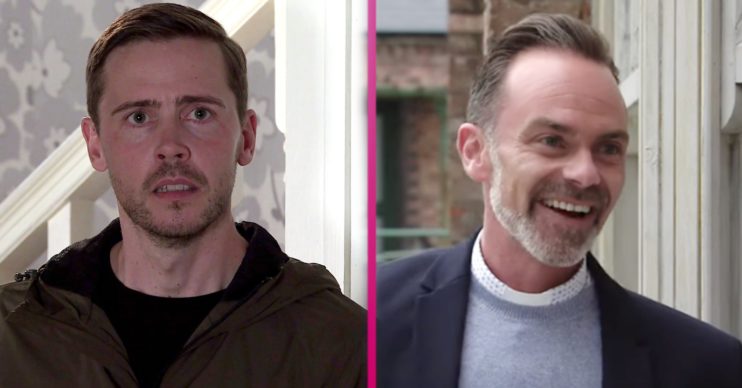 Last week, Todd returned to Weatherfield and reunited with mum Eileen. But it appears Todd’s got himself in trouble with a man named Mick after he stole money from him.

And it seems being back on the cobbles will cause some drama for other people from Todd’s past, especially as he is reunited with his ex-boyfriend Billy.

In future scenes, Billy will perform an exorcism on Eileen’s house. However he gets a shock when the ‘ghost’ turns out to be Todd.

Coronation street: What did Daniel Brocklebank say about Todd and Billy’s reunion?

Recently Daniel Brocklebank, who plays Billy, sat down with Entertainment Daily and other media in a virtual press conference to talk about Todd’s return.

Speaking about the scene when Billy and Todd reunite, Daniel said: “Absolute gem of a scene. When I read it I literally squeaked because I mean Patti is just fabulous as Mary.

“It’s brilliant because it goes from high comedy into bang, to absolute drama. It’s Corrie perfectly. There are very few shows where you get to play comedy and drama in the same show let alone the same scene.

“So it was an absolute joy. But of course to have Todd walking down the stairs after three years, it’s like being smacked in the face. It’s disbelief at first, ‘am I seeing what I’m seeing?’

“Then there’s the realisation and an absolute mixture of emotion – from anger, to being pleased Todd isn’t dead. Billy doesn’t know what to think in that moment.

“Subsequently the scenes that follow were beautifully written and brilliantly directed. We sat down and talked in great length before we shot them to pinpoint all the nuances. I’m looking forward to seeing them.”