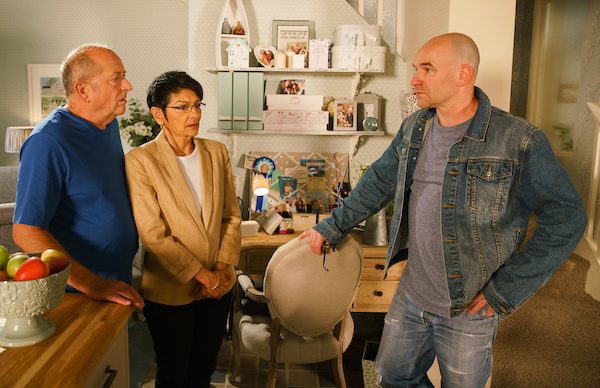 There’s shock heading for Coronation Street next week when Tim Metcalfe realises he is accidentally married to two women.

Until now, Tim has been blissfully unaware that he is actually a secret bigamist… but next week sees the shocking realisation hit him, and it’s thanks to his dad Geoff Metcalfe’s secret wedding to Yasmeen Nazir.

When the pair return from their holiday in Vegas, they shock their friends and family by dropping the bombshell that they are now married.

But while everyone else is reeling from the news, Tim jokes that they need to have another wedding here in the UK to make things legal.

However, when Geoff tells him that there is no need because weddings in Vegas are prefectly legal, the colour starts to drain from Tim’s face.

Later Tim confides in Steve and Kevin that years ago he married an air hostess in Vegas as a joke, and he had no idea that the wedding would actually be official.

Steve and Kevin are left in hysterics as the realisation that he is a bigamist hits Tim… how on earth is he going to get out of this one?

Tim tracks down Adam and Imran for legal advice about his other marriage and the pair confirm that he is in fact breaking the law by being married to Sally.

But instead of coming clean to Sally, Tim decides the best thing to do is track down his first wife, Charlie.

He manages to find her in a bar in town, and he begs her for a divorce. She agrees but tells him that he needs to fund the whole thing, meaning this is about to become an expensive mistake for Tim.

But while Tim thinks he has got away with his monumental mistake, Steve and Kevin tell him that getting a divorce from Charlie is likely to draw attention to the fact he is also married to Sally, and they tell him that honesty is the best policy and it’s time to come clean.

But of course Tim has a master plan to get out of his pickle, and at Geoff and Yasmeen’s party he decides to get down on one knee and ask Sally to marry him – again.

Sally thinks his proposal is the ultimate romantic gesture and agrees. But while Sally is thrilled at the thought of another wedding, little does she know it is all part of Tim’s master plan.

Tim thinks that his scheme is foolproof and that once his divorce from Charlie comes through, he can then marry Sally again and she will be none the wiser… what could possibly go wrong?!

Do you think Tim’s plan is going to work? Leave us a comment on our Facebook page @EntertainmentDailyFix and let us know what you think!