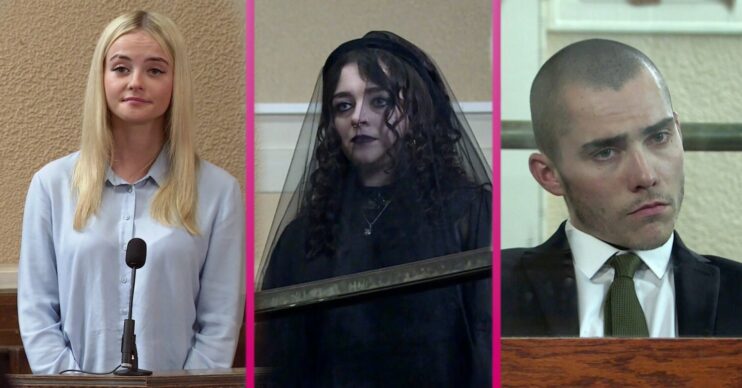 Coronation Street SPOILERS: The murder verdict is in

Next week’s Coronation Street spoilers reveal that the jury in Seb and Nina’s hate crime murder trial will deliver their verdict.

Corey and Kelly will discover their fate as Seb’s distraught loved ones pray that justice is served.

Nina is desperate for them to convict Corey after finally remembering the gruesome details of the horrific attack.

So, as the court reconvenes, will they give the verdict that Nina and Seb’s mum Abi are hoping for?

Kelly takes the stand this week as she recounts what happened after Nina and Seb bumped into their group.

Read more: Who plays Corey Brent in Coronation Street and what else has he been in?

But although Imran’s pleased with her performance, Kelly has to face Corey’s defence lawyer Sabeen.

She cross-examines the vulnerable youngster and accuses Kelly of attacking Seb to impress Corey.

As Kelly fears she’s been discredited on the stand, her mum Laura offers to be her character witness.

But when she takes the stand to tell the jury that Kelly wouldn’t hurt a fly, Imran is worried that Laura might hinder Kelly’s chances.

Do the right thing

When the jury leaves to deliberate, emotional Abi can’t control herself.

She screams at them not to believe Corey’s lies and to convict the right person.

Feeling powerless over what’s happening in court, Abi decides to go on a truth-seeking mission to prove Corey’s dad bribed a witness.

However, it looks like her efforts could be futile as the jury announces they have reached a verdict.

Will they find Corey or Kelly guilty of killing Seb, and will justice be served for Nina and Abi?