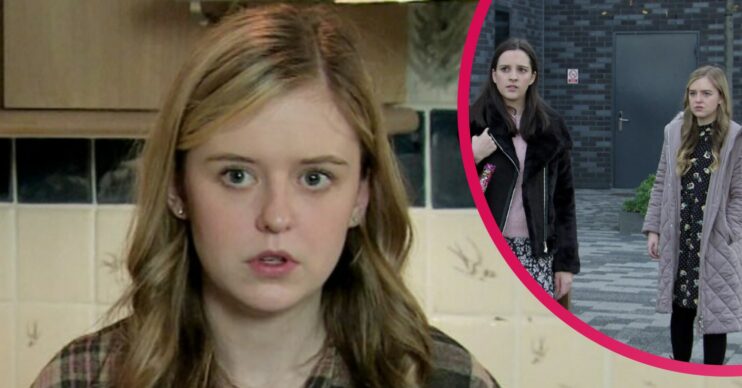 Will anyone realise what's going on before it's too late?

Coronation Street spoilers for next week reveal Summer Spellman‘s eating disorder is going to leave her life in danger.

It has been apparent in recent weeks that Summer is struggling with her confidence and body image.

But things took a turn in at the end of last year when she made herself sick after eating a big meal.

Next week, it becomes clear that wasn’t a one-off occurrence.

Summer starts the week thrilled when she receives a conditional offer from Oxford.

But the pressure of being a star student as well as her desire to look like the perfect models she sees on social media, threaten to overwhelm her.

She heads out to purchase a bag of junk food to binge on, but is caught by Amy Barlow.

Amy has been urged by Aadi to bury the hatchet with her former friend. The pair fell out over Summer’s crush on Daniel Osbourne, Amy’s uncle, after it left him fighting for his job.

Amy finds out the truth?

But Amy has seen her bag and comments that it’s up to Summer what she eats and Amy won’t judge her for indulging in sweet treats.

Little does Amy know what the junk food is really for.

Summer guiltily makes out the sweets aren’t for her, but when she returns home, she takes them out and loads them into her school bag.

What is she going to do with them? And will Amy realise what’s really going on?

Later in the week, Amy attends a diabetes hospital appointment with Summer and they are shocked to bump into Jacob.

He assures them he’s no longer involved with the drugs gang, but Amy orders him to stay away from them.

Back on the street, Summer is disgusted to find Max looking at an upskirting photo, but even more horrified to find out it’s of her.

Summer’s too embarrassed to report it, but Amy and Asha vow to find out who’s taking the pictures and put a stop to it.

As they head off on their crusade, the incident takes it’s toll on struggling Summer who heads to the flat and stuffs herself with chocolate.

She immediately goes to the bathroom to make herself sick.

Summer’s eating disorder is clearly getting worse and she’s putting her life in danger. But will anyone realise before it’s too late?