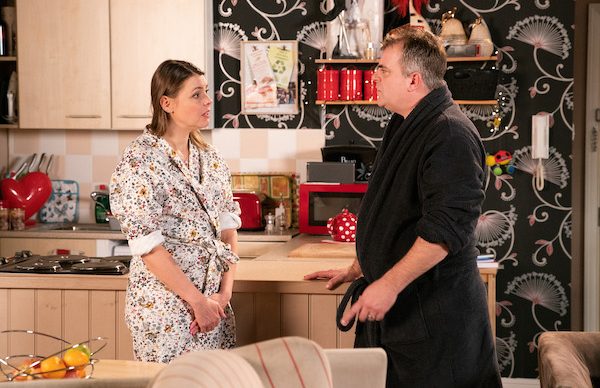 He's gutted, but will he dump her?

Tracy’s New Year’s Eve goes with a literal bang in Coronation Street, as she ends up in bed with someone unexpected after drinking too much.

She has a fight with Steve, who she feels has been ignoring her, and ends up hitting the bottle.

Tracy is mortified when she wakes up in a strange bed the following morning and races home before Steve finds out.

Read more: Fiz and Tyrone’s kids are taken into care

But Amy knows her mum is hiding something when she sees a designer jacket on the back of the chair.

Tracy is horrified to realise she picked up the wrong coat in her haste to leave after her night of passion.

As Amy puts two and two together, she tells Tracy to come clean to Steve, or she will tell her dad everything.

The clock is ticking for Tracy to come clean, as Amy starts her work experience with Paula and demands she pay her a wage.

Paula refuses to pay her, so Amy tells Tracy she’ll have to pay her instead and she wants the minimum wage.

Read more: Shona fights for her life as David fears the worst

Meanwhile, as deeply embarrassed Tracy explains to Leanne that her night of passion was a one-off mistake which they both regret, Amy arrives.

She’s horrified to realise that Leanne now knows about her mum’s indiscretion, and runs away.

Events get even more awkward for Tracy when Sally arranges a little hot tub party, unbeknown to her and Steve who are already having a dip of their own.

With her fling in attendance, Tracy struggles to mask her unease as Leanne devilishly goads Tracy about what she got up to on New Year’s Eve.

Steve clocks the tension and confronts Tracy, wanting to know what happened. Tracy admits she had a one-night stand.

As Steve and Tracy row, Steve’s gobsmacked to discover who Tracy slept with.

Tracy assures Steve she was just feeling low as he’d been ignoring her for weeks.

Steve is devastated… is their marriage over?