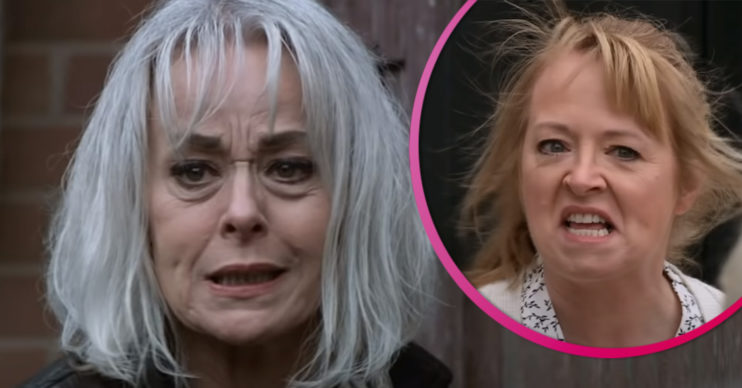 Corrie is moving to primetime for a week of explosive episodes

In Coronation Street spoilers, the soap has revealed an action-packed trailer teasing next week’s horror shooting.

The soap has released an explosive trailer showing evil Sharon Bentley being exposed and a dramatic shooting.

All next week on Coronation Street at the slightly later time of 9pm.

Jenny can be seen confronting Sharon over her evil schemes – and everything kicks off.

“Don’t play the innocent with me,” says Jenny.

“You have been doing Harvey’s dirty work for him.”

“I need to be as far away from here as possible,” says Sharon after a gun is shown.

Meanwhile Peter Barlow is close to giving up on getting a liver transplant – because it’s splitting his family apart.

The alcoholic faces certain death if he doesn’t get a transplant – and Daniel and Adam offered to be living donors.

However, Adam’s wife Sarah convinced him against it.

And with Daniel not a match, he’s at Adam’s throat for the decision.

But Peter insists it’s not worth saving his life if it destroys their relationship.

“If getting a new liver means destroying the family I’m trying to stay alive for then I’m not even sure it’s worth it.”

In other scenes, Seb Franklin’s killer Corey screams that he did nothing wrong.

However it may not be enough as Seb’s mum Abi can be seen following him with a broken bottle.

Will she kill him in the dark week of episodes?

When is Coronation Street on next week?

Next week Corrie’s schedule has been moved for a special week of late night episodes.

Instead of its usual Monday, Wednesday and Friday 7.30pm and 8.30pm episodes, the soap is moving to primetime.

But it will now air an hour-long special on Monday at 9pm.

A half-hour edition will follow on Tuesday at 9pm, and there will be no episode on Wednesday.

Coronation Street will then return at 9pm on Thursday for another 30 minute edition.

However, the week will be wrapped up on Friday with a 30 minute Corrie at 9pm showing the explosive aftermath.