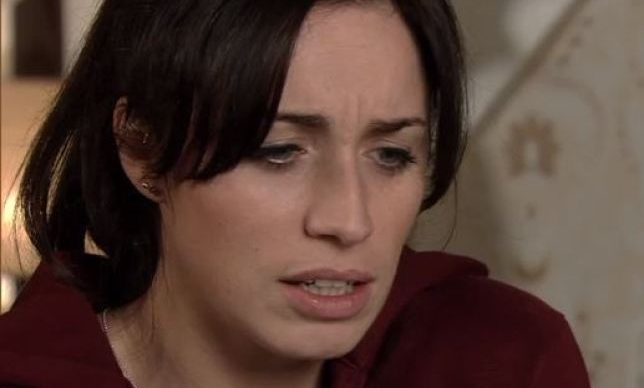 Will she and David split?

Julia Goulding will be leaving our TV screens any day now as she sets off on maternity leave, but where does that leave her Coronation Street character?

As Julia readies herself for the biggest role of her life – becoming a first time mum – her character Shona Ramsey will be written out of the ITV soap… But how?

And will her exit include a split from fiancé David Platt, who is currently in jail?

In upcoming scenes, Shona and David’s relationship will be put under immense pressure once again when Callum Logan’s mum Marion returns to Weatherfield to fight for custody of Max.

Feeling helpless behind bars, and with Shona trying her best to hold the fort at home, things begin to fall apart as Max’s behaviour continues to spiral out of control.

The schoolboy has been lashing out at Shona and other family members, as well as behaving badly at school and eventually getting excluded.

Struggling to adjust to life with his dad behind bars, as well as stopping taking his ADHD medication, it’s little wonder Max is playing up.

However, when Harry is injured during a fight between Max and Lily, Shona leaps to the conclusion that Max is to blame (but he isn’t, Lily is).

After hearing a crash, Shona rushes to the lounge where she sees Harry knocked out cold and quickly calls an ambulance.

Having been shouted at and blamed by Shona, Max storms out and stays with Marion, who he has been secretly visiting for months.

And it’s not long before Marion marches round to confront Shona and, seeing that she has been drinking, brands her an unfit mother and announces her intentions to seek custody.

Later that week, Shona is forced to visit David and tell him what happened – and David realises in horror that Marion might have a good case against them.

As David rages at Shona for her part in it, could David losing custody of his son be the catalyst that splits him and Shona up and results in her leaving Weatherfield?

This week, ED! reported that the role of Marion had been recast, due to actress Susan Cookson currently starring as another troublesome mum in Emmerdale – Lee Posner’s mother.

Max’s grandmother will now be played by The Bill star Kerry Peers.

Actress Julia, 34, is expecting her first child with husband Ben Silver, and has carried on working by trying to cover her bump with loose clothing.

Do you think Shona and David will split up? Leave us a comment on our Facebook page @EntertainmentDailyFix and let us know what you think!