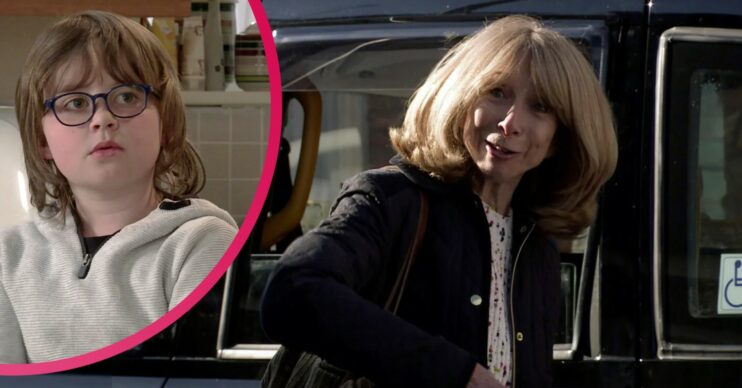 Her departure has ramifications for Sam, too

It looks to be farewell to soap legend Gail Rodwell as the Coronation Street mainstay waves goodbye to Weatherfield.

She’s heading off for pastures new – and maybe even more new surnames – and it isn’t clear whether she’ll return at all.

Where is Gail leaving Coronation Street for?

Having seemingly recovered from recently collapsing in the street, Gail is off on her travels again.

A couple of years ago she spent several months living it up in Bangkok.

And it appears she wishes to spend even more time in south-east Asia with a return trip to Thailand on the cards.

Inevitably, her decision causes a ruckus in the household as young Sam becomes upset about her going away.

Why does Sam react badly?

Already caught in the crossfire as his mum Natasha Blakeman attempts to cut off contact with his dad Nick Tilsley, Sam is overcome when Gail reveals she’s heading off.

He calls round with a get well card for her only to discover his grandmother has no idea if and when she will be back in Weatherfield.

Poor Sam rushes out of the house deeply upset. Gail’s sudden decision also affects Sam’s future in another way, too.

A happy ending of sorts?

With Gail’s departure changing things all round for the extended family, Leanne pleads with Natasha to allow Nick to be part of Sam’s life.

Eventually, Natasha relents, defusing some tension as Gail – part of Corrie for 46 years – looks to be leaving, possibly for good.

Read more: Coronation Street SPOILERS: Gail to die as she collapses from a heart attack?

After all, her mum Audrey Roberts, as well as Nick, son David Platt and daughter-in-law Shona Platt all come together to wave her off.

But as she leaves the cobbles in a taxi, will Gail ever be reunited with her family herself?

This week’s episodes of Coronation Street are now available on ITV Hub.

Coronation Street usually airs on Mondays and Wednesdays 7.30pm and 8.30pm with an hour long episode at 7.30pm on Fridays on ITV.