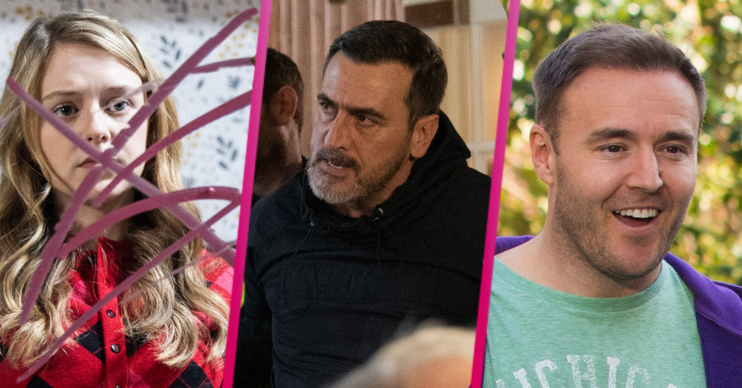 It's a big week of drama on the cobbles

Coronation Street spoilers for next week see a twist in the Abi and Imran story which may finally see her come out on top.

Meanwhile, Peter sees his fury gets the better of him, leaving Carla in a difficult situation.

The Coronation Street spoilers also reveal a business battle for Kirk and Jacob at the factory.

Having learned that Mr Thorne rushed his liver transplant operation for a bet, Peter is furious.

He’s shocked at the abuse of power, and sets out to find Mr Thorne and demand an apology.

He tracks him down to a restaurant, but the showdown doesn’t go well.

Mr Thorne‘s attitude quickly winds Peter up, and he soon loses his temper.

Lashing out, he ends up punching the surgeon.

Soon, the police are called and Peter finds himself arrested for assault.

3. Heartbreak for Aadi and Summer

Aadi is keen to try again with Summer.

However, she admits she’s fallen for someone else, leaving him crestfallen.

Later, she meets up with Aaron from her diabetic support group.

She confides in him about her bulimia. He seems taken aback and Summer fears she’s made a big mistake.

Later, Aaron tells Summer that he thinks it’s best that they don’t see each other again.

This send the troubled teen into a downward spiral.

She looks in the mirror, hating herself, and scrawls on her reflection in lipstick.

After talking to Abi, Kelly is on a mission.

Meanwhile, Imran agrees when Leanne suggests they have a naming day for Alfie.

But he tells Toyah that Abi won’t be at the party.

Ben spots her, so Abi offers him a choice.

Either he admits that he and Imran lied, or she’ll share the video with his boss and the police.

Will Ben give in – and can Abi now win the fight?

Jacob answers the phone at the factory on Kirk’s behalf and ends up taking a huge order from a notoriously tricky client.

However, Kirk ends up getting all the credit.

Later, Sarah reckons Kirk work his magic with another difficult client. Is the game up?

Trying to sort out the mess with Peter, Carla goes to see Mr Thorne.

He agrees to drop the assault charges if Peter withdraws the complaint to the hospital.

But it seems there’s one other condition – he also wants to take Carla to dinner.

9. Peter on the warpath

He’s furious all over again and vows to make Thorne pay.

He contacts the Gazette, then asks Aggie is she can do check the records at the hospital.

Sally offers to go to the doctor with Tim, to discuss his impotence.

Tim refuses, but when he gets to the medical centre alone, he does a runner.

Later, he tells Sally that the doctor said what’s happening is perfectly normal after a big operation.

Can he ever face up to his condition? 11. Second chances for Tyrone and Fiz?

Fiz and Tyrone spend time together at his house, and seem to be getting along well.

Later, Ty runs Fiz back to her new home, Fiz invites him in to have a look inside.

As they take a tour, how do they both really feel about Fiz moving on with this new life?