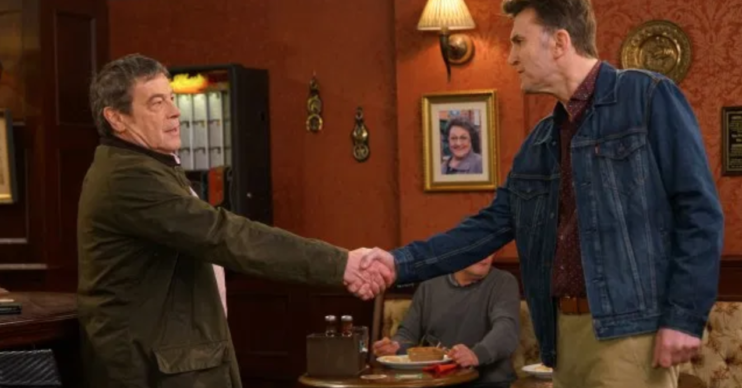 Scott went away to avoid Johnny

In next week’s Coronation Street, Scott’s connection to Johnny is revealed. But is all as it seems?

A couple of weeks ago, Carla’s dad Johnny convinced his wife Jenny to go on a trip to France after learning Scott Emberton, a man from his past, would be staying at the Rovers.

But while Johnny is away, Carla learns a bit more about Scott and Johnny’s past.

Carla is surprised to hear that Scott worked with Johnny in the 70s. She also discovers that Scott knew of her mum.

However things start to get stranger for Carla, when a young scally called Chelsey comes into the Rovers.

As soon as she spots the temporary landlady, she begins to quiz Sean who tells her she’s his boss.

When Carla heads to the toilets, Chelsey follows her and tells her that she knows her. Who is she? Could she have a connection to Scott?

Coronation Street: Where is Johnny?

Back in April, when Johnny learnt that Scott would be staying in their B’n’B, he immediately tried to persuade his wife Jenny that they should go to France to visit Eva.

After convincing Jenny they need a break and Carla agreeing to take over the pub, they quickly set off.

However Johnny was unable to avoid coming face to face with the man from his past and immediately it was obvious there is some history.

Fans started coming up with all sorts of theories including that Johnny and Scott were involved in some sort of criminal job together.

However, it has not been revealed why Johnny was so desperate to get away from him.

Why do you think Johnny wants to avoid Scott?