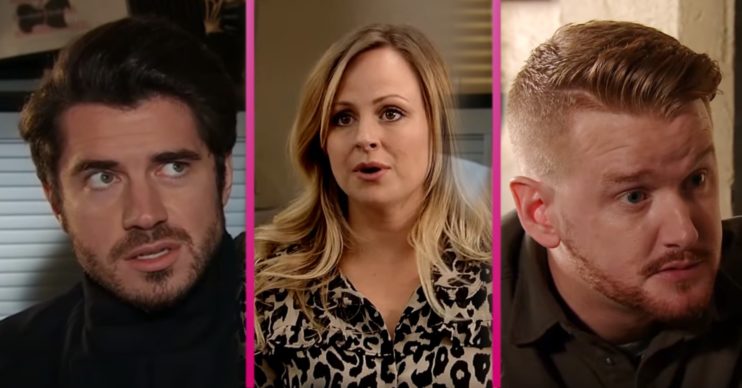 Gary recently admitted to Sarah that he still loves her

Coronation Street spoilers reveal there’s trouble ahead for Sarah and Adam. But will Sarah end up cheating on her husband?

Recently, Sarah learned that her ex-boyfriend Gary killed Rick. But after Gary saved her life, she’s been debating whether to keep what she knows a secret.

In next week’s visit to the cobbles, Adam is stunned to find out from Bernie that the watch Sarah bought off her had the name Rick engraved into the back.

She also reveals that she found it in the woods and Gary seemed keen to get his hands on it.

Adam tells Imran about the watch and he’s now convinced more than ever that Gary murdered Rick. But Sarah is caught out when Craig returns her bag from the accident and Adam walks in to find her holding the watch.

Adam orders his wife to tell him everything she knows about Gary and Rick.

Knowing she hasn’t got much choice left, Sarah admits that if Gary did kill the loan shark it was to protect her and her family.

Later in the week, Emma and Carla help an excited Maria prepare for her wedding.

When Audrey is forced to cancel, as she has a stomach bug, Maria asks David to be her witness instead.

Coronation Street: A charged moment between Gary and Sarah

Meanwhile, Adam goads Gary making him wonder what he knows. The dodgy businessman calls in at number 8 to ask Sarah exactly what she told her husband.

Sarah insists she didn’t tell him anything but Adam is convinced she’s still in love with her ex.

There is a charged moment between the pair. Will Sarah end up cheating on Adam with Gary?

Do you think Sarah should tell Adam the truth about Gary and Rick? Leave us a comment on our Facebook page @EntertainmentDailyFix and let us know what you think!