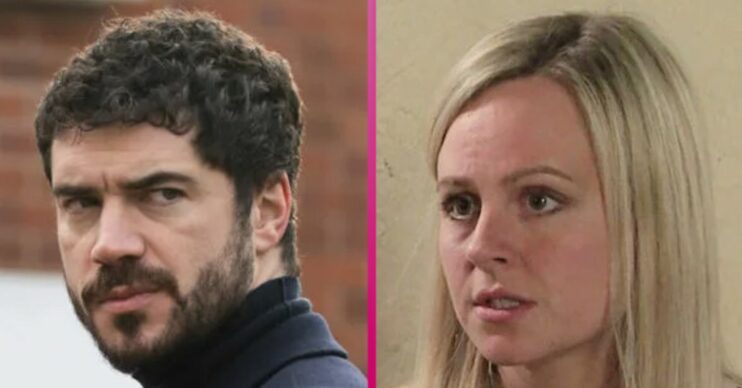 He's left in a terrible state after Lydia's attack

Coronation Street spoilers for next week reveal Sarah and Adam could be reunited after Lydia’s awful attack.

With Adam lying in hospital fighting to see again, Sarah is forced to confront her true feelings for her estranged husband.

Will she be by his side as he recovers?

Adam begins the week with a ray of hope after Sarah invites him to Harry’s birthday party.

Believing she is thawing he turns up with flowers and hopes she’s ready to forgive him.

However, Sarah shocks him when she reveals she’s filed for divorce.

Desperate to get Lydia to admit the truth, Adam texts her from Sarah’s phone and arranges to meet.

Adam wants to record Lydia confessing so he can prove his innocence. However, she’s cleverer than that and soon catches him out, deleting the recording.

As Lydia reveals exactly what Adam did to her all those years ago, he does start to feel a pang of guilt.

However, he still presses her to tell Sarah she made everything up and that’s when Lydia snaps.

She slaps Adam hard. And then she gives him a huge shove, sending him toppling backwards over the balcony railings.

Down below Daniel has come looking for Adam and arrives just in time to see him hit the ground, bloody and unconscious.

As Adam is rushed to hospital, will he be okay?

Do Sarah and Adam get back together in Coronation Street spoilers?

In hospital, the doctor informs the family Adam needs an operation to save his sight following a bleed behind his eye.

Daniel and Ken want to know what happened, but Adam claims he doesn’t remember. Is he telling the truth?

Meanwhile, back on the street, Peter breaks the news of what’s happened to Sarah. But far from rushing to his side, she coldly states Adam is not her problem any more.

Carla, however, urges her to think about it a bit harder before making that decision.

She begs Sarah to be there for Adam when he wakes up as it’s obvious Sarah still loves him.

As Sarah thinks it over and wonders whether she can put everything behind them, Adam finds a surprise visitor in his room.

Is it Sarah? Will his battle to save his sight reunite them? Can they finally focus on the future together after such an ordeal?

Or is Adam facing his latest challenge completely alone?