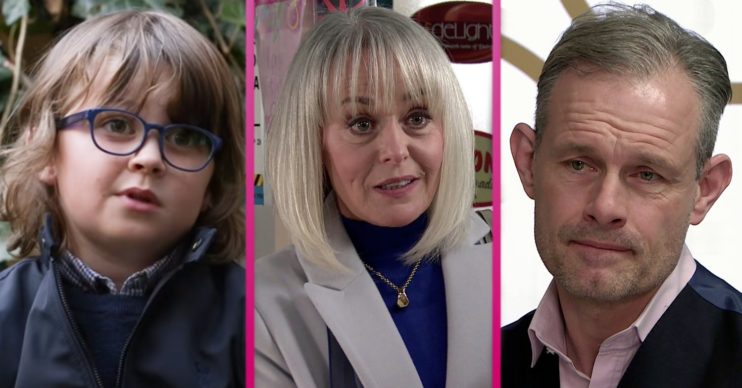 Coronation Street SPOILERS: Sam in danger as Sharon uses him to find Nick?

Sam wants to speak to Nick

Coronation Street spoilers reveal Sharon tries to use Sam to find Nick. But is Sam in danger?

A few weeks ago Nick, Leanne and Simon fled Weatherfield after drug dealer Harvey threatened to hurt them after he was arrested.

Meanwhile Sharon Bentley recently returned and it was revealed she is Harvey’s aunt and is trying to track down Leanne for him.

Coronation Street spoilers: Sam in danger as Sharon uses him into find Nick?

In tonight’s scenes (Wednesday, April 28) Sharon overhears Sarah in the Kabin talking about Sam’s party and offers to help.

Soon Sarah receives a text from Nick asking to meet him at the Red Rec as a matter of urgency.

Sharon offers to pick Sam up from school. She returns to No.8 with Sam and listens in when Sam calls his dad and tells him how much he misses him.

Sharon tells Sam that if he needs someone to talk to he can talk to her.

Soon Sam confides in Sharon. When Sharon suggests to him that she could set up a secret meeting with Nick, Sam is thrilled.

Later Sarah confides in Adam that Nick didn’t show up. When Sarah returns home she finds Sharon and Sam having a birthday disco in the living room.

But could Sam be in danger as Sharon uses him to try and get to Nick?

Later this week Sharon tells Sam that Simon’s dad Peter has gone into hospital for a liver transplant and he ought to contact Nick so he can tell Simon.

Meanwhile in the hideout Nick admits that Sam’s been in touch to let them know about Peter’s transplant. But Simon is listening from the door.

Soon Leanne knocks on Simon’s door and is horrified to find he’s gone. But Simon turns up at the hospital, shocking Peter and Carla.

Simon announces he’s not going back to the hideout, meanwhile Leanne worries that Harvey’s mob have got Simon.

Peter and Carla persuade Simon to leave but as he goes to head out, Peter overhears the cleaner on the phone reporting Simon’s whereabouts.

The cleaner punches Peter and Simon legs it, soon returning to the hideout.

The transplant coordinator explains to Peter and Carla due to his head injury they’ll be keeping him in for a few nights.