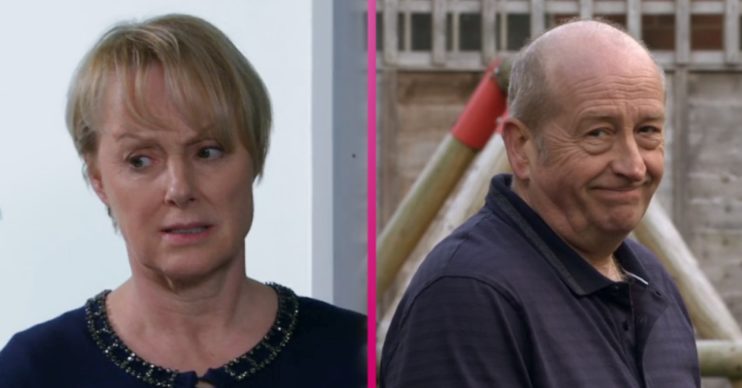 Coronation Street spoilers show Sally has an idea to help Alya get Geoff of Speed Daal. But will it work?

Alya goes to visit Yasmeen in hospital and tells her about Elaine’s disappearance and how she and Sally suspect that Geoff is behind it.

Yasmeen asserts that while Geoff is still at large, she feels safer being in prison.

Sally later suggests to Alya that she should buy Geoff out of the business and offers her the wedding money, pointing out it rightfully belongs to Yasmeen anyway.

Geoff refuses to be bought out

When Geoff refuses to let Alya buy him out of Speed Daal she takes great delight in telling him that Sally was giving her the money that he gave her for the wedding.

Hearing this, Geoff is furious. But how will Tim react?

Sally later apologises to Tim for giving Alya the money without consulting him first. But she assures him that they can still have a wedding.

A spiteful Geoff tells Sally that Tim will always choose him over her as blood is thicker than water.

Will Geoff ever see his dad’s true colours?

Recently, Geoff’s first wife turned up on the cobbles and revealed she is actually Tim’s mum. But she was abused by Geoff and he made her fear for her life, so she had to leave Tim as a baby and cut contact.

When Geoff learnt Elaine was around and could possibly blow his cover, he warned her to keep away form his family.

However she has now gone missing and viewers saw Geoff with Elaine’s phone. He put her sim card down the drain. But where has Elaine gone to?