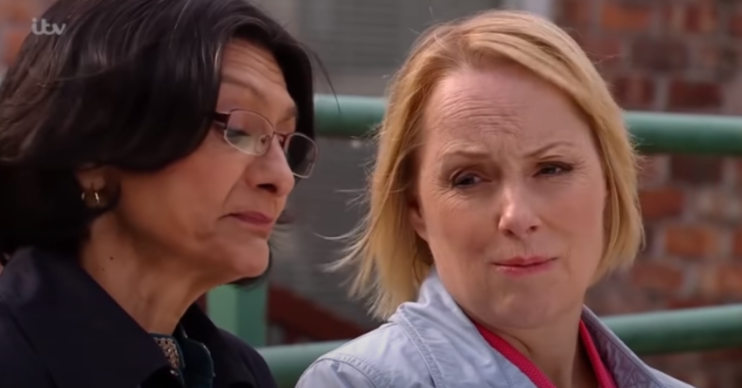 Yasmeen is in prison facing an attempted murder charge

In next week’s Coronation Street, Sally pays Yasmeen a visit in prison. But will Yasmeen tell her about what’s really been happening with her and Geoff?

Currently the Speed Daal chef is in prison waiting to see if she’ll be found guilty of attempted murder. However, Sally is starting to think that Yasmeen was a victim of Geoff’s abuse.

Preview pictures for the upcoming episodes reveal that Alya asks Sally to be a witness for Yasmeen.

This prompts Sally to book a prison visit.

Will Yasmeen tell her about the extent of abuse she’s faced? And will Sally agree to defend her in court?

Meanwhile, Geoff also applies for a prison visit. But will Yasmeen agree to see him?

Later, he returns to work much to Alya and Ryan’s dismay. What is he planning?

Residents are beginning to doubt Geoff

Recently, Yasmeen told Alya about the abuse Geoff put her through.

Desperate to make people see that Yasmeen only stabbed Geoff in self defence, Alya has been telling residents the truth – that Geoff was abusing his wife.

Although Geoff’s son Tim and granddaughter Faye are sticking by him and believe he was was the victim of abuse, Tim’s wife Sally isn’t so sure about Geoff’s side of things.

And it turns out she isn’t the only one as Eileen and Roy have all made it clear they don’t quite believe the radio DJ.

A part of the storyline has seen Geoff hiring escorts behind Yasmeen’s back.

After Tim, Sally and Alya found out about his encounters with sex workers, they were disgusted.

However neighbour Daniel was recently introduced to sex worker Nicky and viewers are convinced she could be the one to expose Geoff.

Could she be the one to save Yasmeen?