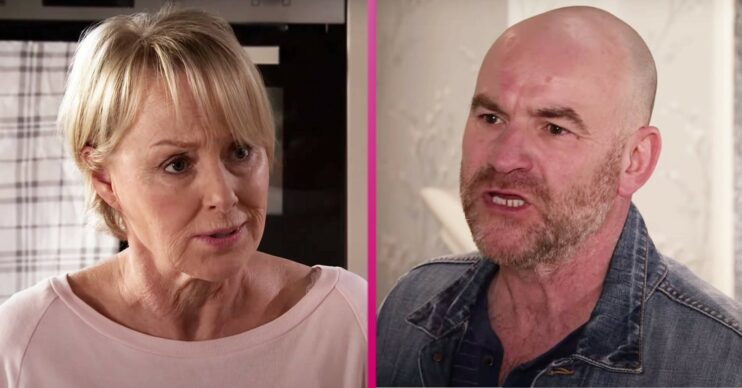 Does Tim ruin their chances as a couple by dismissing therapy?

Coronation Street spoilers reveal tough times might be on the way for Sally and Tim’s marriage.

Next week’s storylines for the soap couple threaten to rip them apart for good.

Will Sally and Tim manage to overcome their sex therapy knock-back together this time?

In next week’s visit to Weatherfield sees a despondent Tim worrying about his and Sally’s sex life.

He’s concerned it could be all over after changing his medication has not brought about any change with his libido.

Thoughtful Sally, aware of how Tim has suffered with erectile dysfunction due to his health issues, does her best to reassure him she  loves him no matter what.

But when Dr Gaddas recommends they consult a sex therapist, Tim is not keen on addressing what’s wrong.

Sally and Tim start their first therapy session – but could it be their last?

Therapist Trina urges the couple to develop intimacy by gazing into each other’s eyes.

However, Tim feels awkward – and declares the whole process a waste of time.

Sally, disappointed by his attitude, insists they press on. But Tim needs to meet her halfway if they have any hope of saving their sex life.

By the end of the week Sally seems to be the one pulling away.

Aggie confides in Tim about her row with Ed – but a distracted Tim is late for a lunch date with Sally and doesn’t listen.

However, as Sally and Tim pretend to be on their first date together, Tim’s attention is occupied by overhearing Ed tell Ronnie and Debbie about his argument with Aggie.

Unsurprisingly, Sally doesn’t take to well to being ignored and heads home. Has Tim blown it?