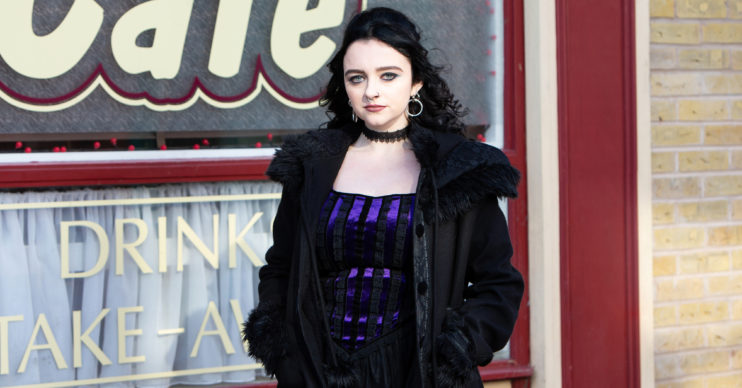 Teen opens up to troubled Asha

She first appeared in Corrie last year as Master Cropper discovered he had a brother, Richard.

Read more: How much do Corrie actors earn?

When Richard lost his life to cancer, his daughter Nina somewhat reluctantly moved in with her uncle after finding herself homeless.

The teenager, who dresses as a Goth, has struggled to fit in and make friends – and is widely considered a bit weird by other residents of Weatherfield.

But she’s about to open up to someone on the Street in their hour of need, and give Corrie fans an insight into her own troubled past.

This week viewers watched in horror as Dev’s daughter Asha stripped off during a video call with Corey, a boy she likes.

She was left devastated after footage was shared amongst her peers – after newcomer Kelly found it on Corey’s camera.

The situation grows worse next week as Dev finds out and, going against his daughter’s wishes, reports it to the police.

I don’t want to give too much away, but there’s quite a lot of stuff leading on from this.

Seeing Asha struggle with the shame, Nina reaches out to offer her support.

Tanisha Gorey, who plays Asha, told Digital Spy: “I don’t want to give too much away, but there’s quite a lot of stuff leading on from this.

“One of the unlikely people who steps forward to help Asha when she’s going through this is Nina.

“A friendship develops between Asha and Nina – and I love that. Nina knows what it’s like to feel different, left out and persecuted.

“That will develop and this story has a long way to go.”

So what has happened in Nina’s past to make her feel so persecuted?

What do you think has happened to Nina? Leave us a comment on our Facebook page @EntertainmentDailyFix and let us know what you think!