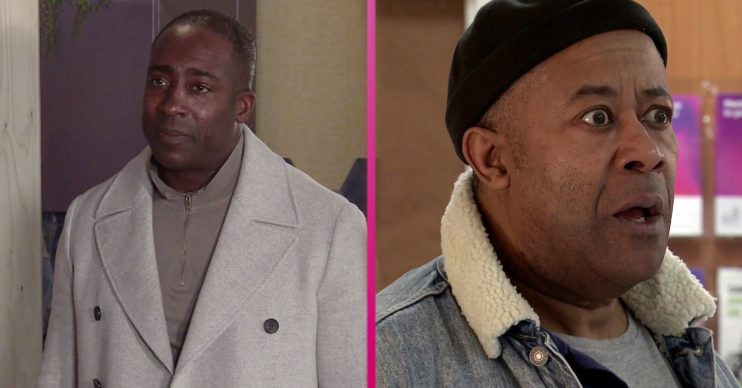 Coronation Street SPOILERS: Ronnie confesses he could be Michael’s dad

Coronation Street spoilers reveal Ronnie tells Ed he could actually be Michael’s father. But how will he react to the news?

In next week’s scenes Michael reveals they’re going to throw a gender reveal party and Ronnie has offered to fund it. But Ed is annoyed that his brother is treading on his toes.

Michael is grateful when Ed insists he’ll pay for the party, not Ronnie. Out of earshot, Ronnie answers his phone and tells the caller to stop pestering him.

Soon Ronnie’s estranged wife Kat turns up, sick of him ignoring her calls.

When Ronnie refuses her pleas to come home Kat accuses him of running away to be with Aggie.

Meanwhile, Grace is out shopping for the party. As she goes to leave the supermarket, a security guard demands to see her receipt.

Locked in an office, Grace suddenly feels a sharp pain. She soon realises with horror it was a contraction.

Back on the street when Kat refuses to leave without explanation. Ronnie admits he’s come to find out if his nephew Michael is really his son! Ed soon arrives and asks who Kat is.

Kat is stung when Ronnie introduces her to Ed as his business partner. She warns her husband that he’s risking destroying his family based on a hunch.

At the hospital, Grace finally locates the receipt for her shopping. Accusing the security guard of racial profiling, Ronnie thrusts it at him.

With Michael at Grace’s bedside, Ed asks his brother why he’s so on edge.

Steeling himself, Ronnie admits that he had a relationship with Aggie before Ed met her and believed that Michael could be his son.

As Ed tries to compute everything, Michael is oblivious to what’s going on with Ed and Ronnie and announces that Grace has had a baby girl.

Michael tells Grace that their daughter is doing fine and it’s time that they put the past behind them and look to the future.

When Ronnie calls round with gifts for the baby, Ed orders him to stay away form his family.

Aggie wishes she could come home and see Ed face to face but can’t risk it due to her aunt’s diagnosis.

In the hospital, a worried Michael tells Ed they’ve had to put the baby back on a ventilator as she was struggling to breathe.

When Ronnie offers to buy Michael a car as he’ll be back and forth to the hospital, Ed is forced to bite his tongue.

Will they tell Michael the truth?