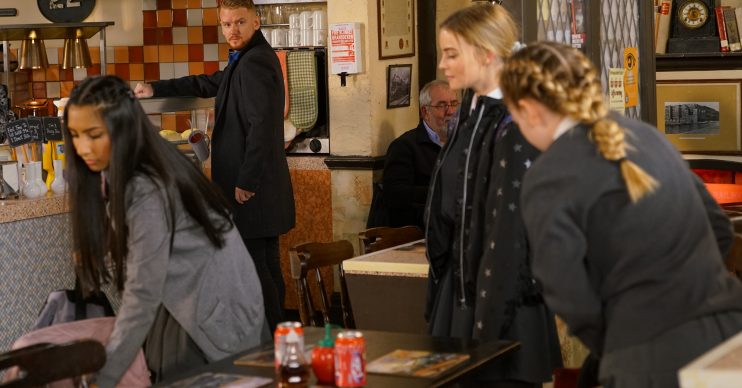 For months, Gary has been hiding the fact he killed Rick Neelan, but he gets a shock when Kelly returns to Coronation Street.

She tells Summer and Asha she’s just started at the school. Meanwhile Gary is shocked to see the teenager.

Read More: Coronation Street’s David Platt tells lie to Gail to over up his secret

He makes a call to her old school asking why she left. Could Kelly’s return be linked to her father’s disappearance?

When did Gary meet Kelly?

Viewers will remember Gary and Rick’s rivalry came to a shocking end last year when the loan shark led the builder to believe he was holding his ex-girlfriend Sarah hostage.

Gary later buried Rick’s body. However he was stunned when he returned to Rick’s office and discovered Rick actually had a child.

Although Gary told her he was a client and knew nothing of Rick’s sudden absence, Kelly grew suspicious of his behaviour.

Kelly began following Gary and demanded answers. Knowing he wouldn’t get rid of the girl until he told her something, he told her that Rick was actually a loan shark and had fled the country to get away from the police.

Read More: Coronation Street ‘panic as contract negotiation out on hold’ during coronavirus

Later Gary pinned the Underworld roof collapse on Rick in order to make sure he didn’t get done for his crimes.

How many deaths is Gary responsible for?

Gary was also responsible for the death of Rana Habeeb, who was killed in the factory roof collapse.

The builder tampered with the roof in order to get more work, as he was having financial struggles at the time. But he didn’t realise he made the roof completely unstable.

When Sally and her sister Gina got on the roof for a protest, it collapsed and came down.

Although all of the factory staff got out safely and mostly uninjured, Rana had gone inside to get something for her wedding.

She eventually died from her injuries leaving her friends and family devastated.

Will the truth about Rick and Rana finally come out?

Do you think Rick’s body will be discovered? Leave us a comment on our Facebook page @EntertainmentDailyFix and let us know what you think!