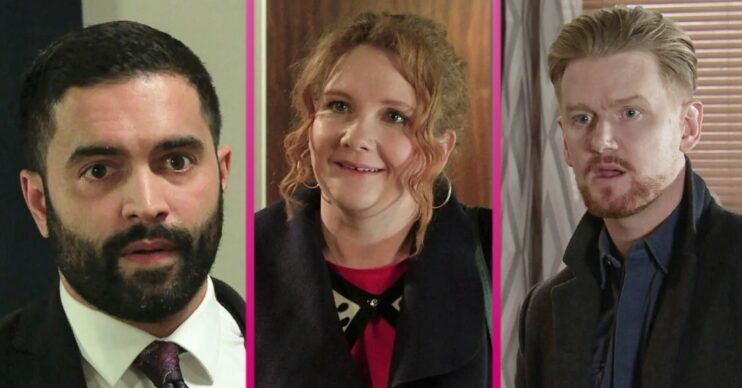 Coronation Street spoilers for next week reveal Rick‘s body has been found – but is Gary in the clear?

Meanwhile, Abi and Imran‘s secret is also exposed, but how will Kevin and Toyah react?

Also, Fiz prepares to leave the cobbles, much to Tyrone’s heartbreak.

The police head to County’s new training ground in their hunt for a body. Kelly sees the news on her phone and is devastated.

Gary and Maria are in a state of panic, but try to support Kelly, who clings to the hope it might not be her dad.

However, she’s left devastated when DS Beckett confirms the body belongs to Rick.

2. Gary confesses to the police?

Meanwhile, Kelly confides in Maria how both her parents let her down and she’s lucky to have Maria and Gary on her side.

Maria is left stunned when Gary tells her he’s handing himself in to the police.

Horrified Maria begs him to reconsider. With Kelly’s words ringing in her ears, Maria tells Gary he’ll destroy their family and ruin Kelly’s life if he confesses.

What will Gary do?

3. Abi fights for her baby

Abi finds herself back in court as she fights for custody of baby Alfie.

Imran is representing her and Toyah is by her side as the local authorities try to paint her as a bad mother.

But as Imran begs the judge to see Abi’s changed, will his impassioned plea be enough? Will the verdict go her way?

4. Imran drops himself in it

After Abi’s hearing Toyah suggests Imran take a step back from the case as he’s done all he can to help.

Abi is fuming and bans him from seeing his son, so while Imran tells Toyah he’ll get Abi another solicitor, he privately promises he’ll do whatever it takes to be part of Alfie’s life.

He even offers to put his name on the birth certificate, which Abi agrees to.

But has Imran just dropped himself in it?

5. Kevin finds out the truth

Worried Toyah questions what the package Abi’s carrying contains and is left very concerned when Abi is secretive.

Toyah assumes she’s back on drugs and warns Kevin, who goes looking for the package.

Kevin is stunned by the revelation, but will he tell Toyah?

She and Imran are sitting down with Elsie’s social worker to discuss her adoption, but it looks like the opportune moment for the truth to come out…

Emma agrees to walk Peanut as Faye’s struggling with her allergies.

Emma invites Jon along, but she’s stopped in her tracks when Beth catches them out together.

Beth later reveals to Craig she met Emma’s old school friend and suspicious Craig confronts Emma over who she was with.

Emma denies she met Jon in secret, but will Craig believe her?

8. Jon drops a bombshell on Emma

Jon reveals to Emma Ted has left him £25k in his will.

He has decided to use the money to move to Australia and start a new life there.

The couple agree to make the most of the time they have left together and book into a hotel room.

9. Craig returns to the police

Craig is excited about his decision to return to the police.

He’s concerned Emma could jeopardise it when he thinks she’s seeing Jon, but she assures him she’s not.

Craig then gets an email confirming he can go back to the force.

Fiz is gutted when Phill tells her he can’t afford the renovation on the new house as he’s lost his job.

The estate agent then reveals to Fiz people are put off by the sinkhole on Coronation Street and she needs to drop the price of No.9 if she wants to sell it at all.

Fiz is left feeling unsure over her future.

Fiz is stunned when the estate agent confirms Tyrone has instructed him to lower the price of No.9.

She’s grateful and thanks Ty for his understanding.

However, Tyrone is left shocked when Fiz reveals she and Phill are moving into the new house sooner to start the renovation jobs themselves.

Tyrone is gutted to realise his gesture has backfired so badly as Fiz prepares to exit the street.

Sally and Tim are thrilled when he gets the all clear and head straight to the bedroom.

However they are once again interrupted by Elaine!

Tim resolves to ask him mum to leave, but actually ends up offering to redecorate the spare room for her.

As Sally fumes and heads straight back to Gina’s, will Tim be able to make it right?

Billy is worried Summer is working too hard and insists she take a lunch break.

But not wanting to eat anything, Summer covers that she’ll eat in her room while she works.

Todd tries to coax her into having a night out with her mates, but Summer refuses.

Summer finally agrees to take a night off revising and go out with her friends.

But she’s fed up of being seen as the boring one and starts knocking back glasses of wine.

Asha, Amy and Nina are concerned about her insulin levels, but Summer snaps at them she’s just having a good time.

Is Summer on a dangerous downward spiral that could leave her fighting for her life?

Nick is desperate to get Sam interested in something other than chess and books him a trip to the space centre.

Confused by Sam’s lack of enthusiasm, Nick is left stunned when Sam admits he’s been playing chess with Roy.

Furious Nick confronts Leanne, but will he have a change of heart?