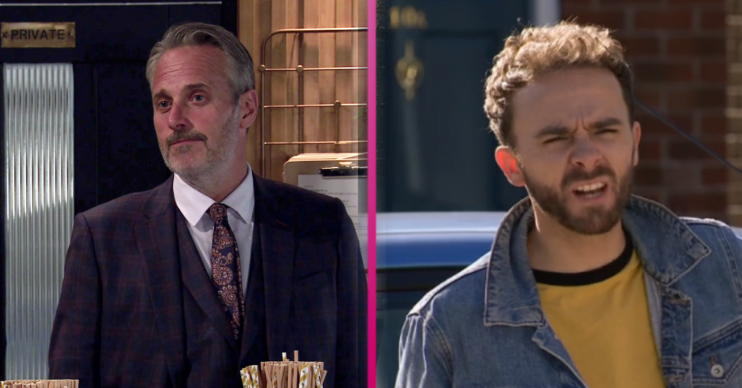 Coronation Street SPOILERS: Ray reveals his plans to kick the Platts out of their home

Ray wants the Platts out of their house!

Coronation Street spoilers reveal Ray plans to get the Platt family out of their home. What is he planning?

This week, Gary started to figure out that Ray is trying to buy people out of their properties on the street.

In upcoming scenes, Gary is fed up with their neighbours. Maria urges him to take the job with Ray.

Gary sets out his stall to the businessman and points out that with him on side, he’ll have an easier task persuading locals to sell their houses. Ray is quietly impressed.

Aaron encourages them to be upfront and honest with each other. But when Shona casually refers to David’s rape, David is horrified.

Coronation Street: Ray wants the Platts out of No.8

Across the street, Ray tells Gary that the contract is his and his first job is to get the Platts to sell up.

Later, David finds Hugo taking pictures of the barber’s. After the incident with Shona, he threatens to put David out of business.

Overhearing the conversation, Gary listens in.

David tells Gary that he had an offer on the house from Ray’s property friend, which would sort out his financial problems. However he doesn’t want to uproot Shona and the kids.

Gary tells David he should take the money but see if he can rent the property back from her.

However later Ray reveals he plans to turf David and his family out of the house. Gary can’t help but feel a bit guilty.

The hairdresser speaks to Shona about selling the house, and she assures him she’s not bothered as long as she’s with him.

David decides to sell No.8

David comes to a decision and thanks Gary for his advice. He says he’s spoken to Ray’s mate Roxy and agreed to sell the house on the condition she leases it back to him.

Gary masks his guilt knowing this isn’t the plan. Meanwhile Gail is furious when she finds out David is selling the house.

He explains that he’s selling the house to an investor who is prepared to rent it back to them, the sink hole will be fixed and the kids won’t be uprooted.

However Gail is unconvinced. Is it all too good to be true?