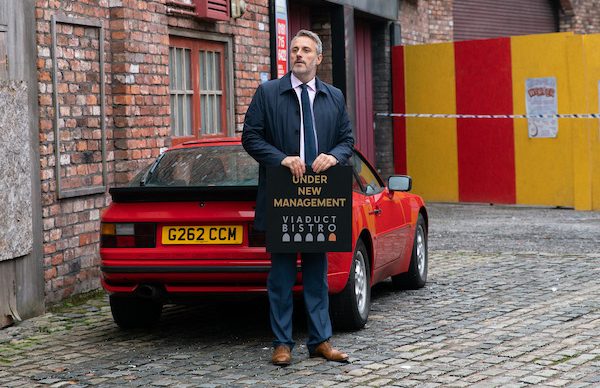 Are Abi and Kevin headed for prison?

Next week’s Coronation Street sees Ray Crosby looking for revenge on Abi Franklin for torching his car – and he’ll stop at nothing to get what he wants.

Ray’s abusive ways towards women were finally exposed when Abi made a speech at a charity fundraiser, introducing his guests to just some of the victims that he had targeted over the years.

But of course Ray didn’t take too kindly to his reputation being tarnished and soon he was verbally lashing out at Abi, telling her that he only used her and was never interested in a relationship with her.

However, if there is one person on Coronation Street you don’t mess with, it’s Abi – and she got revenge for his sickening ways by stealing his beloved car and torching it.

But Ray isn’t the sort of man to let something like that lie, and he is back to his threatening ways next week, telling Abi that he now has dash cam footage of her stealing his car before it was torched.

However, Ray has a get-out clause for Abi… he won’t go to the police if she agrees to sleep with him.

Despite being horrified by the thought of Ray’s indecent proposal, Abi feels like she doesn’t have much option but to go through with his request, and she keeps what is happening a secret from Kevin.

Later, things get even worse for Abi when she gets back to Kevin’s house, only to find Ray is there.

Ray is fuming that Kevin has been covering for Abi, having lied to the police by giving her an alibi for the night of the charity fundraiser.

But Ray is about to kick Kevin where it hurts by demanding that he sells the garage to him in return for staying out of jail.

Offering Kevin the measly price of £90,000 for the garage, Ray tells Kevin he needs an answer by the end of the day. But how is Ray’s business partner Tyrone going to feel about having to sell their livelihood?

Tyrone is fuming when he finds out that Kevin has risked everything to protect Abi, but will he let his friend go to jail?

As Ray puts the pressure on, Abi and Kevin grow closer and even end up confessing their love for one another after Sally sets them up on a date.

But how will Kevin feel when he finds out about Ray’s indecent proposal to keep them out of prison?

Would you like to see Kevin and Abi make a go of their romance? Leave us a comment on our Facebook page @EntertainmentDailyFix and let us know what you think!