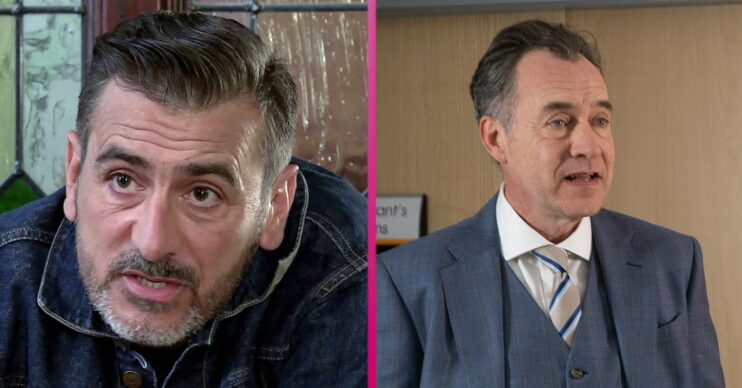 Coronation Street SPOILERS: Peter goes too far as he gets revenge on Mr Thorne?

Peter was furious after finding out about what Mr Thorne did

Coronation Street spoilers for this week reveal Peter sets out to get revenge on Mr Thorne.

This week, Peter found out Mr Thorne had a bet to finish Peter’s liver transplant operation in under four hours and took a selfie during his surgery.

Peter was furious and ended up punching Mr Thorne. However it looks like Peter will set out to ruin Mr Thorne’s reputation.

Last week, Aggie discovered Mr Thorne made a bet with a colleague that he would finish Peter Barlow’s liver transplant in under four hours and managed to do it.

Aggie reported her boss and his surgeries were suspended.

When Peter and Carla found out what Mr Thorne had done, Peter approached the surgeon and demanded an apology.

Mr Thorne refused to say sorry and Peter tracked him down to a restaurant.

Mr Thorne wound Peter up which resulted in Peter punching him.

Soon Peter was arrested and later charged with assault.

In tonight’s episode (Wednesday, May 11) Carla found Mr Thorne and tried to make amends with him on Peter’s behalf and ask him to drop the charges.

However she was shocked when he asked her to dinner and refused.

He then asked to exchange numbers and said he would call to let her know his decision about dropping Peter’s charges.

Peter and Mr Thorne came to an arrangement

He told Peter he would drop the charges against him and in return he asked Peter to retract his complaint and he would take an early retirement.

Later Peter returned home and told Carla about his deal with Thorne.

However when Carla left her phone behind, Peter saw a text from Mr Thorne telling her the charges were dropped and asking her for dinner.

When Carla returned home, Peter confronted her and she was honest with him.

Peter was enraged but later the police confirmed to Peter the charges were dropped.

At the hospital, Peter ran into Mr Thorne again and confirmed he was retiring.

However in the Bistro, Carla and Peter were shocked to see Mr Thorne having a retirement party.

Soon Peter overheard Mr Thorne saying he would be taking up his new position in the States later this year.

When Peter called him out on it, Mr Thorne said he’d been appointed as the professor of Hepatology at a university hospital in Philadelphia.

Speaking privately with Carla and Peter he admitted he was headhunted a few months ago and was waiting for the right time to take it.

Peter threatened to put a complaint to the hospital again but Mr Thorne warned he wouldn’t be believed.

Peter told Carla he’s going to make him pay. But what will he do?

In Friday’s scenes (May 13) Peter calls the Gazette and asks him to run an article on Mr Thorne’s unethical medical practises.

Peter asks Aggie to dig through the NHS records and provide him with any information which might incriminate Mr Thorne.

Aggie explains she can’t afford to risk her job, but will she end up helping Peter?