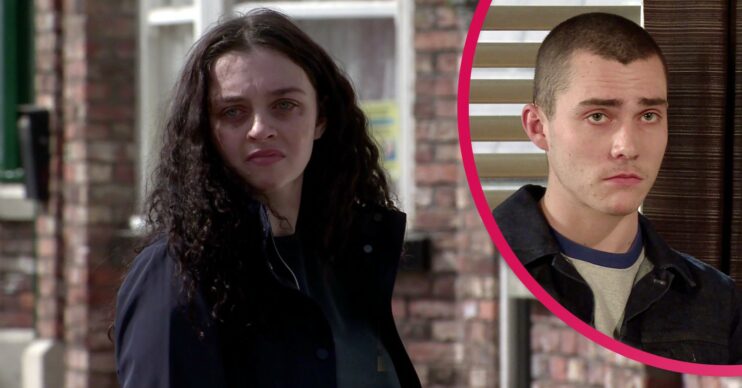 Coronation Street spoilers for next week reveal Nina goes after Corey, but will she attack him?

In next week’s scenes Nina staggers home after spending the night in the ginnel.

She lies to Roy about where she’s been all night.

When Roy suggests she could work on her graphic novel, Nina rips at the pages, declaring it’s rubbish, just like her life.

Roy and Asha tape it back together and post photos on her Instagram, but Nina is furious.

At the corner shop, Nina makes an attempt to steal another bottle of vodka, however Carla clocks her and warns her that alcohol won’t solve anything.

But Carla’s words fall on deaf ears and Nina joins Daisy and her friend Noah in the Bistro.

She begins to knock back the wine as she flirts with Noah, until he advises Daisy to take her home.

Daisy takes Nina out of the Bistro and is about to hand her over to Roy, but she ends up getting into a taxi, leaving Roy worried sick about his niece.

Nina returns, having been out all night again, leaving Roy worried about her.

She’s ill-prepared for a meeting at the factory and ends up telling Sarah to stick her job.

In the Rovers, she drinks with a much older guy named Hughie, who she met in town the night before.

Daisy sees and is disapproving when Hughie suggests they go back to his hotel. Daisy confides in Abi that she’s worried in Nina.

In the hotel bar, Nina spots Tommy Orpington at a table with Corey.

However as they get up to leave, Nina picks up the award and follows them. Will she attack Corey?

Next week Coronation Street will air for an hour on Monday (June 14) and Thursday (June 17) at 9pm.