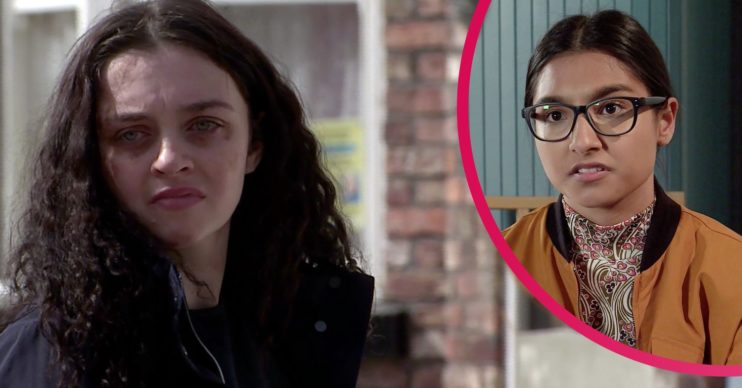 Coronation Street SPOILERS: Nina begins to self-harm as she struggles with Seb’s death

Coronation Street spoilers reveal Nina turns to drink as she struggles with Seb’s death. Will she get the help she needs?

Last month, Nina and her boyfriend Seb were attacked by Corey Brent, Kelly Neelan and their friends.

Abi was later given the news that her son Seb failed the brain stem tests and had died from his injuries.

Nina was heartbroken finding out that her boyfriend had died and in upcoming scenes she begins to struggle.

In next week’s scenes Nina confides in Asha that she can’t stop blaming herself for what happened to Seb.

Later Billy and Roy ask Nina to speak to Summer, who’s struggling to sleep and eat.

However Nina ends up snapping at Summer and points out the extent of her own loss, leaving Summer feeling awful.

Soon Nina stops by the corner shop and whilst Dev is distracted, she steals a bottle of vodka.

Attempting to put things right with Summer, Nina suggests that they all have a drink.

But soon Nina gets drunk and cuts herself. She refuses to get help and heads out leaving Asha and Summer worried about her.

Meanwhile in the ginnel, Nina tries to block out her grief by knocking back the bottle.

But will she be okay?