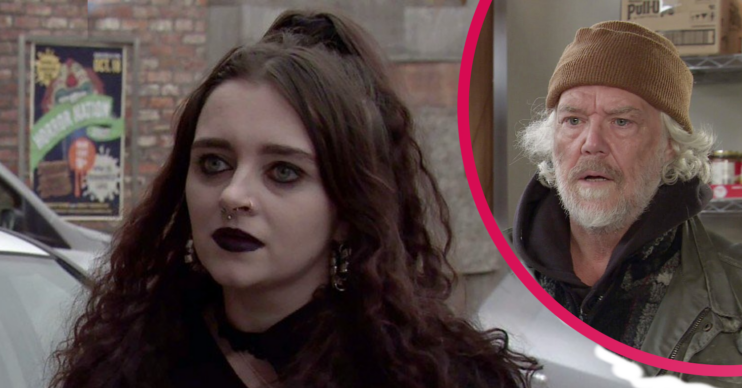 Is this the breakthrough they’ve been praying for?

Coronation Street spoilers for next week show Nina and Asha on a mission after discovering fresh evidence against killer Corey.

The amateur sleuths are tipped off when Asha serves a homeless man wearing a Weatherfield County backpack in the corner shop and tells Nina.

As footballer Corey’s former girlfriend, Asha knows that the club only gives these backpacks to players.

Read more: Coronation Street SPOILERS: What’s next for Imran and Abi after it’s revealed they spent the night together?

So, when she quizzes the man, called Stu, and he tells her he found it in the river, Asha knows it’s a lead.

Corey hid his bloodstained clothes in the bag and disposed of them in the water, complete with DNA evidence.

Asha tries to get the bag from Stu, who rushes away before she can catch him.

But Asha is confident that he holds the key to Corey’s guilt.

Nina is thrilled to hear Asha’s news, and they decide to track down Stu together.

They try to think about the places he might frequent, including vicar Billy’s soup kitchen.

The police don’t seem interested when they call the lead in, so they take a picture of Stu to Billy instead.

The image – captured on Dev’s CCTV – helps Billy confirm Stu’s identity, but none of them realises he’s listening in.

Now Stu knows they are after him, it looks like he’ll try to disappear.

Fortunately for the girls, Billy isn’t their only link to the local homeless community.

Sean and his friend Carol give them advice on where to look for Stu.

But things go wrong when Nina visits the community at the riverbank and starts searching Stu’s belongings without his permission.

His friends demand they leave, but they end up bumping into him on their way home.

However, Stu tells them he doesn’t want to be involved and escapes once again.

Can Nina find a way to get through to him, or will Corey continue to evade justice?