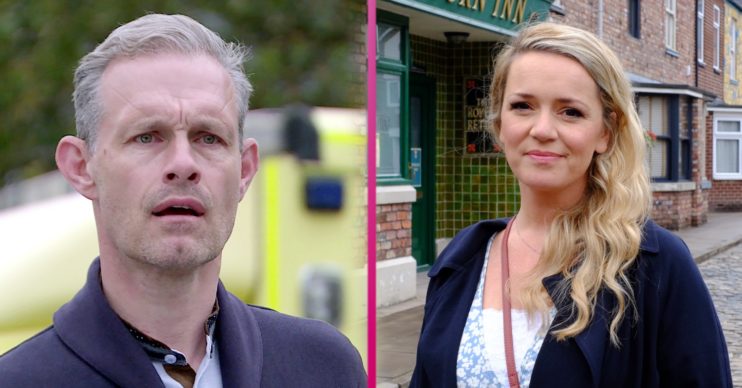 Nick and Natasha split in 2010

Coronation Street spoilers for next week reveal Nick ends up running into his ex-girlfriend Natasha. But will he tell Leanne?

In next week’s scenes, Nick, Leanne and Steve make preparations for their holiday to Cornwall, but they’re interrupted by the sound of Oliver’s seizure alarm.

They all head to the hospital. As Nick and Steve wait in the hospital corridor, they’re taken aback to see Nick’s ex Natasha, who approaches them.

When Nick reveals he’s waiting for news of his stepson, Natasha says she’s there for a dermatology appointment.

Will Nick tell Leanne about his encounter with his former flame?

Later, the doctor breaks the news to Nick, Leanne and Steve that Oliver has been moved into intensive care and put on life support.

While Leanne remains adamant that her son will pull through, Nick and Steve don’t share her optimism.

Return of Natasha Blakeman to Corrie

It was confirmed back in June that Natasha would be returning to Weatherfield after 10 years away.

Back in 2010, Nick and Natasha were together but they split up. When he discovered she was pregnant he still refused to take her back.

As a result she terminated her pregnancy. But Nick eventually came round to the idea of being a dad and took Natasha back.

She kept the abortion quiet until Nick’s mum Gail found out and told her son the truth.

Nick ended things with Natasha once again and in a heartbroken state she overdosed. Nick managed to find her and help her, but when she recovered, she left the cobbles in a cab.

Fans have already come up for a theory that Natasha could be returning with Nick’s child.

Are you excited for Natasha’s return? Leave us a comment on our Facebook page @EntertainmentDailyFix and let us know what you think of this story.