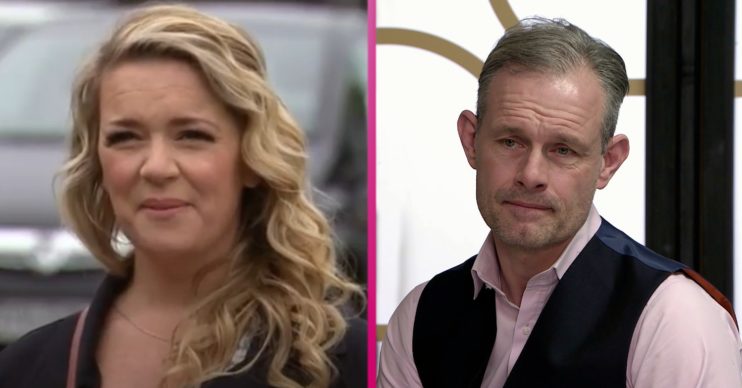 Nick and Toyah think Leanne is having an affair

Coronation Street spoilers reveal Natasha makes a shock confession to Nick. Will it change things between him and Leanne?

In next week’s scenes Simon thanks Leanne for getting Harvey off his back and promises he’ll never get mixed up with anyone like that again. Leanne daren’t tell him the truth.

Leanne is upset to discover Nick his still living with his ex, Natasha. But when Nick asserts he’d rather be at home with her but she’s the one stopping him, Leanne can’t argue.

Having received a text from Harvey, Leanne asks if she can borrow his car. Later Leanne sits in Nick’s car counting her drug money when a police officer knocks on the window.

However Leanne is relieved when the officer tell her there’s been a spate of car thefts.

Back home, she hides her burner phone and nurses uniform before telling him she wants out. But Harvey has other plans and tells her she’s such a success, he’s moving her on to bigger deals.

From her window, Leanne despairs as she watches Nick, Natasha and Sam looking to all intents, the perfect family.

Later Harvey drops off more drugs for Leanne. He orders her to put on her nurses uniform and get out there and she feels trapped.

Coronation Street spoilers: Toyah and Nick assume Leanne is having an affair

When Toyah spots Leanne leaving Victoria Court with Harvey, she assumes that she’s having an affair behind Nick’s back.

Having made the drop, Leanne heads off in her nurses uniform. But when a woman approaches and asks her to help a man who’s collapsed at the tram station, Leanne’s horrified.

Soon Harvey is calling round with another job for Leanne, but when she refuses an argument kicks off.

Having heard from Toyah that she saw Leanne with another man, Nick goes to pay her a visit.

As Nick comes up to the flat, Leanne is forced to hide Harvey in Oliver’s bedroom. But when Nick spots Harvey’s jacket, his suspicions are confirmed.

Natasha confesses her feelings for Nick

Later, Natasha admits to Nick that she still has feelings for him. Will Nick fall back into Natasha’s arms?

Having reached a decision, Leanne goes to the police and reports Harvey’s drug operation. But she’s shocked when she ends up getting arrested and fears she’s made a terrible mistake.

Simon returns home to find no sign of Leanne. He tells Nick how she’s gone missing, lied about going to France and has barely left the flat since Christmas.

Meanwhile the police interview Leanne and she covers for Simon, making out he was never involved in any drug deliveries and she only got involved to protect him.

Leanne begins to work with the police?

The officer tells Leanne that they’ve been watching Harvey for some time and are aware that he grooms young lads and they need her help to nail him.

Leanne returns home and lies to Harvey, making out she didn’t have time to deliver the drugs. But he tells her to get on with it if she values Simon’s life.

Leanne puts on her nurses uniform once again and heads out. But Simon is suspicious and follows her.

As she waits nervously for the drug dealer, Simon appears. She promises to explain later and tells Simon to go home.