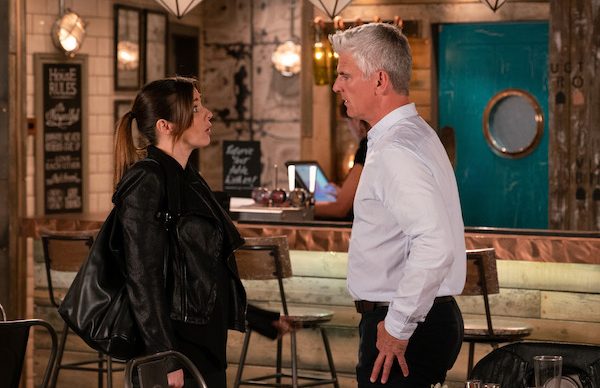 His double life was always going to catch up with him

As Kym Marsh gears up for her Coronation Street exit as Michelle Connor, chances are it’s going to have rather a lot to do with her cheating fiancé Robert Preston.

And new pictures obtained by The Sun have revealed she’s about to catch him out.

Viewers known Robert has been leading a double life after getting Vicky Jefferies pregnant and then reuniting with Michelle.

Robert was secretly seeing Vicky while he and Michelle had broken up, but when they got back together, Robert tried to end it with Vicky.

Her son, Tyler, then revealed Vicky was pregnant and Robert reunited with Vicky so she wouldn’t get rid of their baby.

But he failed to tell Michelle he was going to be dad and instead has been spinning a very twisted web of lies to keep both women happy.

He even ended up accidentally proposing to Vicky when she found Michelle’s engagement ring in his pocket!

The Sun reports Michelle will get out of the car to confront Robert – but will she get the whole story?

Is expert liar Robert prepared to tell yet another porky pie?

Robert and Vicky have also been pictured having a blazing row that has spilled out onto the street – has she also cottoned on to Robert’s lies?

When Kym Marsh announced her exit from the soap after 13 years, it was rumoured Michelle would flee the cobbles after discovering the truth about Robert’s infidelity on their wedding day.

Robert actor Tristan Gemmill will also be departing the soap later this year.

And Kerri Quinn, who plays Vicky, has confirmed she will be exiting at the end of this storyline – although she has expressed that she would love to stay on.

Does this mean Robert will leave with one of the women?

Which one would be stupid enough to take him back after all his lies and deceit are exposed?

With Vicky’s baby set to be born around Christmas time, could it be a triple festive exit?