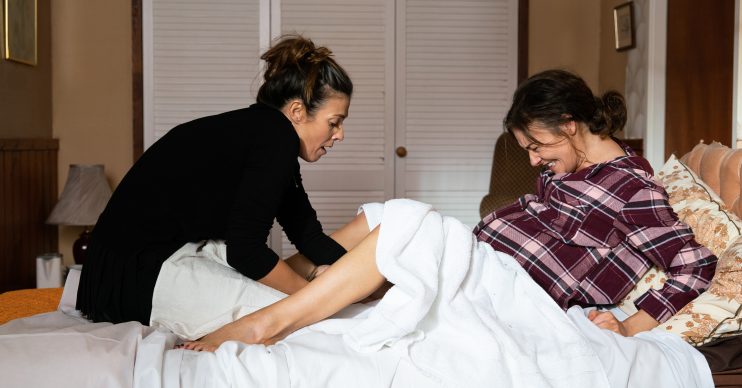 Michelle Connor finds herself being a reluctant midwife tonight, when she is forced to deliver her love rival’s baby in Coronation Street.

In these newly-released teaser pictures from the ITV soap, we can see the dramatic moment Vicky Jefferies gives birth – with her former fiancé’s former fiancé by her side.

In Monday night’s episode (December 16), viewers saw Vicky had been hiding out in a hotel room as part of the two women’s plan to frame Robert for murder.

Although she later seemed to be in the early stages of labour, she sent Michelle away saying she was fine.

However, in Friday night’s episode (December 20), Vicky calls Michelle to say she is in full-on labour.

With the baby about to arrive, the women have to make the decision about whether to break their cover and call for help…

But as things begin to move quickly, Michelle realises she is going to have to deliver the baby.

It’s a bittersweet moment for Michelle as the baby boy is born. Of course, her relief at the safe delivery is tinged with the sadness of the loss of her own baby Ruari.

Will the birth of the baby force the women to come clean about their plan and let Robert see his child?

Or will Vicky and her son disappear without a trace?

Viewers know that Michelle and Vicky were both engaged to Robert, with the cheating chef leading a double life for months.

After finding out about his deceit, the women joined forces to make it look as though Robert had killed his pregnant lover Vicky.

Since Michelle and Robert’s ill-fated wedding day, Vicky has been locked away in a hotel room and the plan to frame him with planted ‘evidence’ came together as Robert was arrested.

This week, Robert was surprised to learn from Paula that there was a delay in the court proceedings as new information had come to light which appeared to prove Robert was lying about his whereabouts on the night Vicky ‘went missing’.

Will Robert be able to prove his innocence? And will Michelle really let him go down for a crime he didn’t commit?

Do you think Michelle and Vicky have gone too far? Leave us a comment on our Facebook page @EntertainmentDailyFix and let us know what you think!