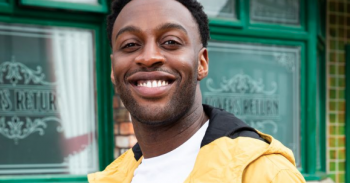 He kept them quiet!?

Michael Bailey is about to have his past catch up with him, when his ‘secret baby and ex-girlfriend’ arrive in Coronation Street.

The Baileys arrived in Weatherfield in June – and, while they’ve made themselves at home, there’s still a lot to learn about the family.

The young footballer had been hiding his sexuality, rather than risk facing prejudice as an openly gay, black player.

Bethany was mortified when she attempted to kiss James, until he blurted out the truth about his sexuality.

Now it’s big brother Michael’s turn to have some skeletons escape his closet, when his ex-girlfriend arrives on the cobbles, with their baby daughter, Tiana.

According to The Sun Online, Michael’s secret life is set to be exposed when his ex and child rock up on the cobbles.

A source close to the soap told the website: “Michael isn’t going to know what’s hit him when his ex turns up and reminds him about their child.

“When she told Michael she was pregnant he didn’t react well.”

The insider continued: “The flaky self-professed entrepreneur disappeared for a week and proved to her just how immature he is.

“She knew he wouldn’t be a good father, so cut him out of her and their daughter’s life before the birth.”

The report also says that Michael didn’t do much to try and find his daughter, and has moved on.

It’s not just Michael who will be shocked by the new arrivals – his parents Aggie and Ed are going to be mortified to find out they are grandparents and that their son abandoned his child.

The newcomers are said to have already started filming scenes on the cobbles, but the actors have not yet been revealed.

The Baileys became the first black family to move onto the Street in the ITV soap’s history.

They moved into number three, when Norris Cole sold up.

Speaking about the family’s introduction, producer Iain MacLeod said: “I am really excited about the Baileys, the audience is going to love them.

“They’re funny, warm and will pull together. The actors we’ve cast are all individually brilliant but together they have a truly incredible chemistry.”

Are you excited by this plot development? Leave us a comment on our Facebook page @EntertainmentDailyFix and let us know what you think!

Brain Surgeons: Between Life and Death has Channel 4 viewers in tears