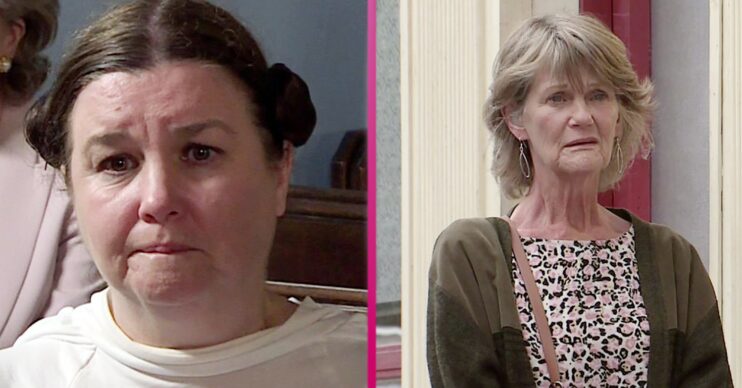 Coronation Street SPOILERS: Mary decapitates the paperboy outside the Kabin

What will Mary find?

Coronation Street spoilers for next week reveal that Mary decapitates the Kabin paperboy statue in order to find Norris‘s secret.

In next week’s scenes George shows Freda the Order of Service for Norris’s funeral.

When Freda points out that he’s got Norris’s date of birth wrong, George is mortified.

However Freda’s week goes from bad to worse.

When Freda learns that Gemma has gone to the hospital to meet other mums whose kids have cochlear implants, she struggles to hide her annoyance.

Gemma assures Freda that after the op, they’ll still maintain links with other deaf people.

Freda is hurt when Bernie asserts that Aled will be normal once he’s had the operation.

With Gemma stressed out, Freda offers to take Aled for a walk, but when she overhears Bernie and Chesney discussing the hassle of attending deaf groups and they want Aled to talk properly and fit in, she’s further upset.

When Freda doesn’t return, a panicky Gemma confides in Roy that she fears she’s taken Aled.

As Gemma asserts they need to find Aled and get him to hospital before he misses his operation, an emotional Freda is in the community centre showing Aled a website dedicated to successful deaf people.

When she sees Gemma at the window, she signs that she’s busy.

Enlisting the help of an interpreter, who’s arrived to discuss Norris’s funeral plans, Gemma does her best to get through to Freda but she refuses to hand Aled over.

As Chesney arrives, will they be able to get Freda to come out before they miss the op?

As mourners gather in the church for Norris’s funeral, Audrey hands round a hip flask of tequila.

As Mary takes a huge swig, Gail watches with concern.

After Rita delivers a heart-warming eulogy about her best friend, Billy reads a letter left by Norris.

Freda and Mary are touched by his words.

The secret in the paperboy

After teasing that the paperboy outside the Kabin contains a secret, Norris finishes by revealing that Rita used to secretively have his hair coloured by Claudia.

Audrey rounds on Rita for her betrayal.

Norris’s wake takes place but the mood is ruined by Audrey and Rita’s row.

Outside The Kabin Mary, Ken, Gail and Brian gather to unlock the secret hid inside the paperboy.

When they can’t get it open, Mary goes and gets a chainsaw and decapitates the paperboy.

What secrets lie inside?