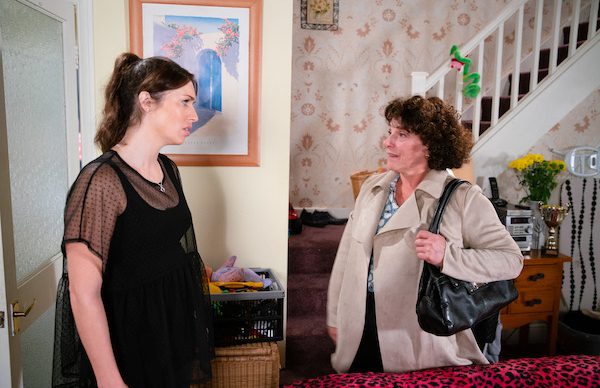 In a preview shared on the Corrie YouTube channel, Marion goes to see Shona at the Platts’ home.

She tells Shona that she doesn’t recognise the boy she’s describing and how well-behaved Max is when he comes to her house.

Marion begins questioning Shona, asking if she ever helps Max with his homework. Shona insists that she tries, but as he’s in high school he needs to be self-motivated.

Marion also says whenever her grandson comes over he’s on edge and there’s always drama, but Shona says that Max is lying.

When Marion accuses Shona of being the liar, Shona protests her innocence.

She tells Marion that Max pushed his brother Harry over but Marion defends him saying Max told her Lily was the one who pushed Harry.

Marion then accuses of Shona of shoving Max so hard, she hurt his shoulders.

The pair continue to argue and Shona points out that she still cares and looks after Max even though she isn’t his biological mother.

Shona soon tells Marion she should leave but before she makes her exit srops the bombshell that she’ll be making enquiries about the children.

When Shona tells Marion to make sure Max comes home, Marion threatens that if Shona lays her hands on him one more time, it won’t be her on the doorstep.

With Marion’s words ringing in her ears, Shona has every right to be concerned… Is she at risk of losing the kids?

Fans of the show will remember Marion, who made appearances in the soap from 2015 until 2016.

It was recently revealed that the role had been recast and original actress Susan Cookson would not be reprising the role.

Marion is the mother of Callum Logan, who was on the show from 2014 to 2015. He was Kylie Platt’s ex-boyfriend, and the biological father of her son, Max.

Kylie came just in time hitting Callum over the head but the blow ended up killing him.