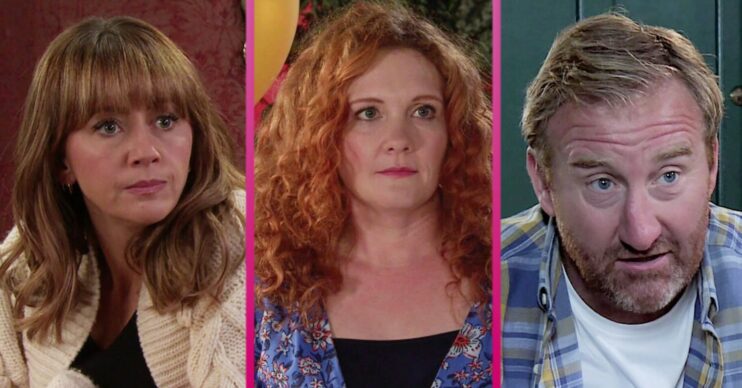 It wouldn't be the first time!

Coronation Street spoilers for next week reveal Maria Connor is spending a lot of time with Phill Whittaker.

It wouldn’t be the first time Maria has moved in on Fiz‘s man – or any taken fella for that matter.

Is history about to repeat itself?

Maria has her hands full right now. She’s running a business, caring for wayward Kelly Neelan and her terminally ill mum, Laura Neelan, as well as running a campaign to join Weatherfield council.

She’s up against arch nemesis Bernard who is trying to sabotage her every move.

When Maria convinces a journalist to take some photos of her in Victoria Garden to back her campaign, she’s furious when the shoot is hijacked by Bernard.

He’s got James and Ashley, two Weatherfield County footballers, in tow and the journalist is quick to turn his attention towards them.

Maria is fuming and admits she thinks she should give up the fight as Bernard and his cheap tactics are leaps and bounds ahead of her.

But Phill reckons he can help Maria out.

Phill was the one who suggested Maria run for council in the first place, and as they sit down together in the cafe, he guides Maria through what to do.

But will it win her the campaign? And will it cause her and Phill to grow closer?

What does this mean for Fiz? Will Maria try to take her man again?

It wouldn’t be the first time Maria has moved in on Fiz’s man!

In 2014 she became obsessed with Tyrone Dobbs and tried to separate him from then-girlfriend, Fiz.

Maria sent threatening text messages pretending to be from Tyrone’s abusive ex, Kirsty Soames. However the police traced the number and Maria’s guilt was revealed.

She tried to convince Tyrone he should leave Fiz for her and they should be together, but he stuck with Fiz.

And that wasn’t even the only time Maria took a bloke who wasn’t hers!

She had a one-night stand with Toyah’s boyfriend John Arnley and fell pregnant by him. Maria had an abortion and Toyah even supported her through it.

However, their friendship was over when Toyah found out and she left the Street.

More recently Maria had an affair with Aidan Connor behind his fiancée, Eva Price‘s back.

She’s now happily married to Gary Windass, but with his attentions directed at keeping his killer secret, could neglected Maria seek comfort elsewhere?

Can Phill be trusted in Coronation Street?

He’s kind, caring and adores Fiz and her girls, Hope and Ruby.

He has picked up the pieces of Fiz’s life after Tyrone broke her heart and left her for Alina Pop. And he’s so patient with Tyrone being involved in their lives.

Phill even tore a strip off his overbearing mother, Mimi, when she wasn’t nice to Fiz.

But all this has made fans believe Phill is just too good to be true.

Is anyone really that nice?

Can we smell an affair coming along that will see Phill fall well and truly off his pedestal?