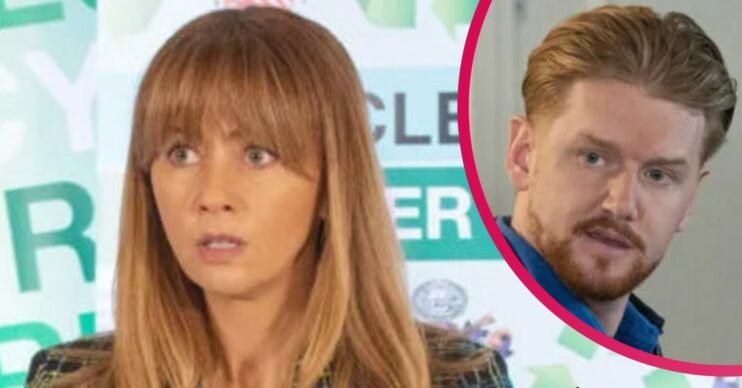 Gary lashes out to protect her, but has he made things worse?

Coronation Street spoilers for next week reveal Maria Connor is horrified when a deep-fake video of her goes viral.

At first she refuses to be beaten, but after a nasty encounter at a press conference, Maria makes a huge decision about her future.

Her bombshell leaves the cobbles‘ residents shocked, but will she change her mind?

Maria is under fire from all angles following her plans to add an extra recycling bin to each household.

The bins haven’t been emptied as the refuse collectors are on strike and her neighbours aren’t happy. Plus, someone is trolling her online.

After Liam gets into a fight at school, Maria finds out there is another viral video of her doing the rounds.

Maria is devastated as the video is very convincing.

Maria decides the right thing to do is call the police and report the threats she’s been getting.

But despite Gary thinking she should lay low, Maria refuses to hide away and hosts a planned press conference.

Although there’s a police presence, Jimmy, the refuse team leader heckles her.

Gary’s temper quickly gets the better of him and deciding Jimmy is behind the online abuse and videos, pins him against a wall.

She then drops the surprise news she is quitting the council to spare her family.

Sally is shocked Maria is giving up local politics at the first sign of trouble. She sits her down and explains she too has been in Maria’s position and begs her not to be beaten.

As Sally insists her desire to make a difference is important and the community needs her, will Maria be persuaded to stick it out?

By the end of the week, it’s clear whatever her decision, it’s still affecting her family.

As Liam has a Star Trek themed birthday party, Gary insists on a family selfie with Maria, Kelly, Liam and Jake.

However their happy family moment is ruined when Maria tells him not to share the picture online. She is frightened of more abuse.

Maria is upset the trolls are still controlling her life and she’s letting them.

But as she runs scared and Gary comforts her, where will this all end?