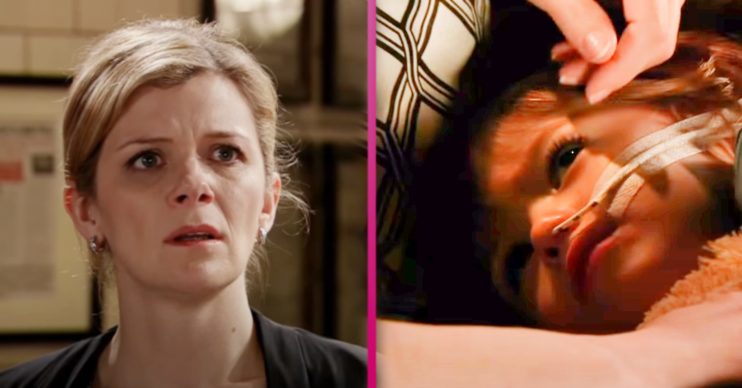 Coronation Street SPOILERS: Leanne lies about Oliver and his illness

Oliver has a terminal illness

Coronation Street spoilers reveal Leanne lies to an old friend about Oliver and his illness. But will Toyah be able to help her as she struggles with the guilt?

Recently, Oliver was diagnosed with mitochondrial disease and Leanne has struggled to cope with the news.

In next week’s Corrie, Leanne takes delivery of a specially adapted chair for Oliver. She explains to Toyah that she and Steve are off to look for schools that cater for children in Oliver’s situation.

But later Leanne runs into an old friend named Mandy from her antenatal classes. Seeing her pal, Mandy asks after Oliver.

However Leanne ends up making out that Oliver is fine. But as Mandy heads off, the worried mum is overwhelmed with grief.

Later, Leanne confides in Toyah that Mandy asked after Oliver and she lied, making out he was doing okay. She admits to her sister that she feels ashamed of herself.

Toyah’s heart breaks for Leanne. But Leanne urges Toyah to get the fostering wheels in motion as she deserves some happiness.

Coronation Street: What else is coming up for Leanne?

As well as Oliver being ill, it looks like Leanne could be facing drama with her boyfriend Nick when he runs into his ex-girlfriend Natasha Blakeman.

Earlier this month it was revealed actress Rachel Leskovac would be returning to the cobbles after 10 years.

A chance encounter at the hospital with Natasha will put extra strain on Nick and Leanne’s already fragile relationship.

Nick and Leanne are struggling with Oliver’s diagnosis and Nick is finding it hard to know how to help Leanne.

As the stepdad, Nick will begin to feel increasingly sidelined as Leanne and Steve are forced to make difficult decisions about their son’s treatment.

But in early autumn Nick is surprised to run into Natasha at the hospital. The pair catch up on news of the last decade but Nick is reluctant to tell Leanne about his chance meeting.

Some fans have already predicted Natasha will return with Nick’s child.