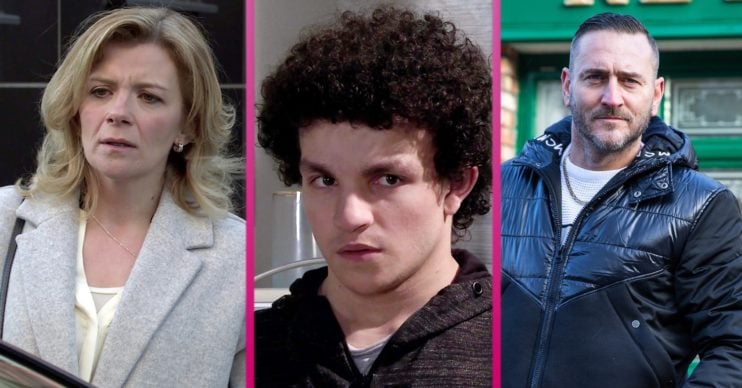 Leanne has been delivering drugs for Harvey

Coronation Street spoilers reveal Leanne and Simon are forced to leave Weatherfield to get away from Harvey.

In next week’s scenes one of Harvey’s dealers, Ned, turns up at Leanne’s flat and to her horror, he explains he’s expecting a delivery and will be using her flat to bag up the drugs.

When Simon lets himself in, Ned introduces himself and Leanne feels sick to her stomach. When Leanne quizzes Ned about the drugs delivery, he becomes suspicious of her motives.

Leanne and Simon manage to convince Ned that they’re on his side. Leanne makes out she has to go shopping and ends up leaving Simon alone with Ned.

Later, Ned orders Leanne to phone in sick to work as the drugs delivery is back on. Nick and Toyah watch as Harvey approaches Leanne’s flat.

Nick assumes that he’s Leanne new boyfriend, meanwhile Toyah is furious at Leanne for skiving off work, especially as she’s just got her job back.

Harvey sets off to pick up the drugs and takes Simon with him. Worried for her son’s safety, Leanne begs them to take her instead, but her pleas fall on deaf ears.

Later, Harvey tells Leanne that he was set up and it looks like someone has grassed him up.

With little choice, Leanne admits to Harvey that it was her.

A tearful Leanne goes to see Toyah and confides in her that she and Simon are moving away as it’s the only way she can ensure he’s kept safe from Harvey.

Nick calls in at the flat and finds Leanne and Simon about to leave. He reveals that Toyah has told him everything, he still loves her and they can sort things out.

But Leanne insists that it’s too late. A tearful Leanne tells her sister how she had to say a painful goodbye to Nick.

In the factory, a miserable Nick fills Sarah and David in on why Leanne has to move away. He realises he needs to choose between going with her or staying in Weatherfield with Sam.

Simon finds Peter in Victoria Garden and tells him that he loves him, leaving Peter deeply touched.

Will they ever be able to come back?