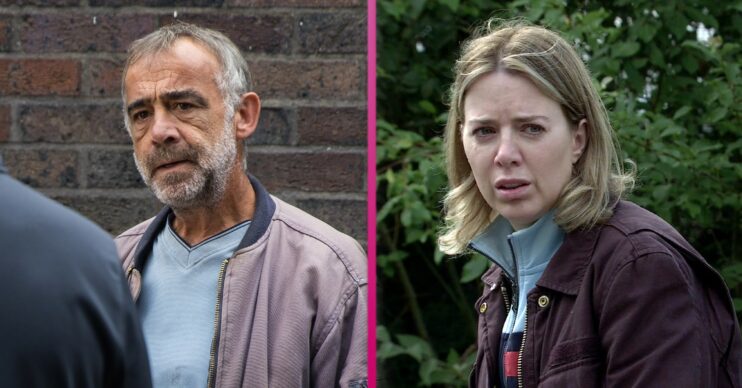 Seb was murdered earlier this year

Coronation Street spoilers for next week reveal Kevin meets Seb’s dad as he attempts to track down Abi.

After distributing homemade leaflets about Corey, Nina is devastated to discover he has been named in the opening line-up for county.

She vows to name and shame him and take to social media labelling him a murderer.

Nina curses herself for giving Corey the opportunity to play the victim and vows he won’t get away with it.

She tries to convince Daniel to run a story but that fails. Kevin shows her Corey’s post-match press conference, she declares that she wants to kill him.

Later when she’s driving past Seb’s memorial garden, she sees Corey in there laughing on his phone and sees red.

The Gazette is full of Corey scoring a goal in his first match. Nina feels there’s no escaping his smug face.

Nina tells Roy that she intends to make the most of her life rather than dwell on perusing justice, as she couldn’t bear to cause him any pain.

Roy is hugely relieved to have got through to her.

However when Kevin hears Roy voice his concerns for Nina’s mental state, he fears for Abi.

It gets worse when Sally reveals she’s not had a response from Abi either. Soon Kevin leaves a new message for Abi, pleading with her to get in touch.

A frantic Kevin informs the police of Abi’s disappearance but is shocked to get a notification from the bank that £2k has been taken out of their joint account.

Sickened by the thought of what Abi could have taken it for, Kevin visits the Dog & Gun with a photo of Abi, asking regulars if she’s been in.

Discovering Seb’s dad Tez is in the bar, Kevin breaks the news of Seb’s murder. He explains his fears that Abi has turned to drugs in her grief.

Tez assures him that he hasn’t seen of heard from Abi.

Kevin is unable to shake his doubts, he gets into his car and tracks down Tez and spots him doing a drug deal.

As Tez samples the goods from his drug deal, Kevin edges nearer and snaps a photo on his phone.

Kevin stands up to Tez, convinced he lied yesterday and has seen Abi.

Kevin orders Tez to tell him all he knows or will send the incriminating photo to his probation officer.

Tez pretends to Kevin that he caught sight of Abi weeks ago but didn’t have a conversation with her.

Kevin leaves Abi a heartfelt voicemail, explaining how much he loves and misses her. Will she come home?