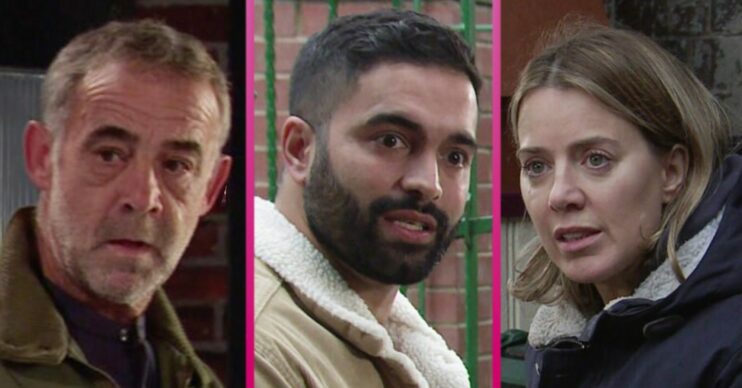 Coronation Street spoiler: Kevin finds out the truth about Abi and Imran?

Coronation Street spoilers for the New Year reveal Kevin Webster is on the verge of discovering Abi‘s one-night stand with Imran Habeeb.

After a joyful Christmas, Abi and Kevin are set for a bleak start to 2022 when she fears she’s pregnant.

Will she confess everything to Kevin or will he find out some other way?

Abi starts the year by panicking she’s carrying a baby and wondering what on earth she’s going to do if she is.

She summons Imran to Victoria Garden and tells him she plans to do a pregnancy test.

He’s stunned when she insists if it comes out positive she will tell Kevin everything as he deserves to know the truth.

Before Imran can talk her out of it, Kevin is standing right there!

Neither of them have seen him approaching and they have no idea how long he’s been standing behind them.

Has Kevin found out about their night together? Or is he still none-the-wiser?

Will Abi be forced to confess to her husband with a positive pregnancy test in hand?

The soap has not revealed whether Abi is actually pregnant, although there’s rarely a one-night stand without the soap gods dishing out consequences!

This would definitely be the end of Toyah and Imran’s relationship, which is already in a bad place. She knows he cheated, but not who with, so could a baby revelation be the final nail in the coffin for them?

And what about Kevin and Abi? Is she so sure the baby isn’t her husband’s?

They were together at the time, though with relations strained it’s possible intimacy was off the cards.

When did Imran and Abi sleep together?

The pair hooked-up the night of the verdict in Corey Brent’s trial for killing Abi’s son, Seb Franklin, back in September.

She was devastated after Corey got off, and Imran, who had been defending foster daughter Kelly Neelan, who was sent down for the crime, was equally as upset not to have saved Kelly.

For a while all we knew was that Imran had spent the night with someone else and not who.

But eagle-eyed fans had worked it out, much like they predicted Abi would be pregnant with his baby.

Do Kevin and Abi break up?

Kevin has stood by Abi through so much already. She broke up with him due to her grief over Seb and her desire for revenge on Corey.

But Kev waited until she was ready and took her back when she returned.

However, she then hunted Corey down with a gun. Although she didn’t shoot him, the weapon was then used to kill Natasha Blakeman.

Even though Kevin knows the truth about that, he still married her and he even whisked her away on honeymoon while the dust of the police investigation died down.

But could bringing up another man’s child after she cheated be a step too far for loyal Kev?