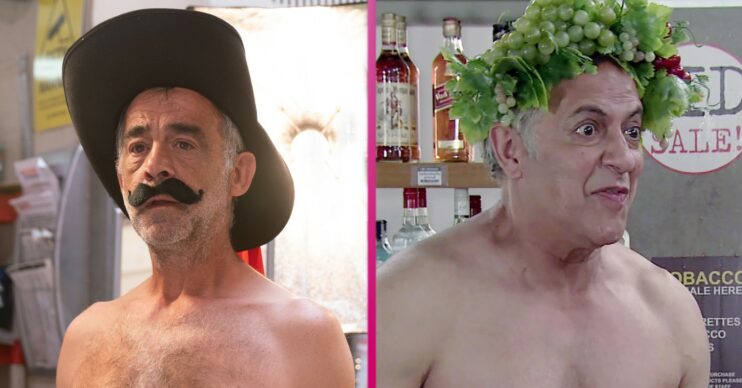 Coronation Street SPOILERS: Kevin and Dev caught in the buff in public

Emma and Curtis star working on the calendar

Coronation Street spoilers reveal Kevin and Dev are both caught nude as they prepare for the naked calendar.

This week, Curtis suggested doing a naked calendar to help Steve to reach his goal of £100k raised for Oliver’s fund.

In next week’s scenes Brian sets up his camera for the photoshoot in the garage.

Read more: Coronation Street and Emmerdale cast and crew suffer ‘Covid outbreak’ and could be ‘shut down’

Kevin shouts to Brian that he’s ready and drops his robe as Abi enters the garage.

Abi is stunned to be faced with a naked Kevin.

Meanwhile Debbie enters the corner shop and is faced with a naked Dev.

Dev darts between the aisles trying to cover his modesty.

Meanwhile Curtis tells Emma that he has a dental appointment and rushes off, leaving Emma to sort out Dev’s photoshoot.

Later Debbie tells Steve she saw Curtis in the Bistro with a young girl looking cosy.

Steve goes to the Bistro and approaches Curtis. Soon Curtis breaks up with Emma, however when Steve confronts Curtis, he tells Steve his secret and makes him promise not to tell Emma.

Later Tracy sees Steve and Curtis getting into a taxi together and demands answers. Curtis eventually tells Emma his secret, but what is it?

Dev pulls out of the photoshoot

Later in the week, Dev tells Curtis that he wants to pull out of the photoshoot as it could scupper his chances of joining the golf club.

Curtis promises he’ll do his best but fears that it’s too late.

Dev brandishes the calendar picture at Curtis and Emma and demands they put a stop to the print run.

As Curtis stresses over the calendar, Emma worries for his health.