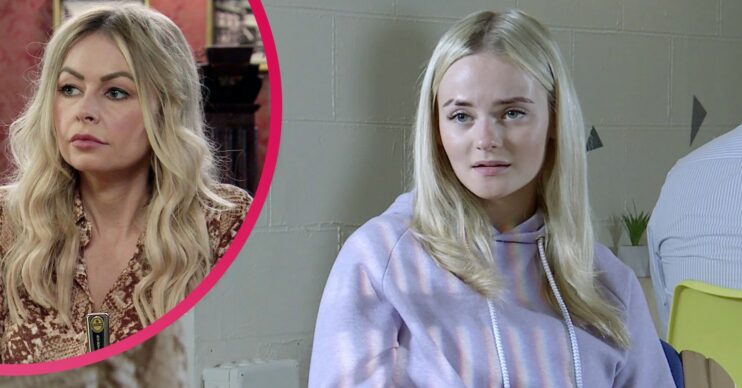 Kelly is currently in prison

Coronation Street spoilers for next week reveal Kelly makes a confession to Laura about Seb and Nina’s attack.

In May, Seb and Nina were attacked by Corey Brent, Kelly Neelan and their friends. Later Seb died from his injuries in hospital.

While Kelly claimed she didn’t physically harm the couple, Corey said she did. As Seb’s DNA was found on Kelly’s clothes and she was charged with murder. Kelly was later denied bail.

In next week’s scenes Carla reveals they’re looking for a cleaner at the factory. Imran speaks to Carla and bags the job for Laura.

When Sean tells Laura about Fiz’s article in the Gazette and how they offered to pay her to do another one. Hearing this, Laura is intrigued.

Later Laura goes to visit her daughter Kelly in prison.

In the prison visiting room, Laura quizzes Kelly about the night of Seb and Nina’s attack and assures her that she can tell her anything.

Later, Laura asks Chris the journalist to meet up and they meet in the empty factory.

Laura asks her if she’d be interested in doing a piece on Kelly. She wonders how much she’d pay her for it.

But how will Kelly react?

While Corey wasn’t original charged, he ended up getting arrested last month for breaching his bail conditions after he went to the café and began having a go at Nina.