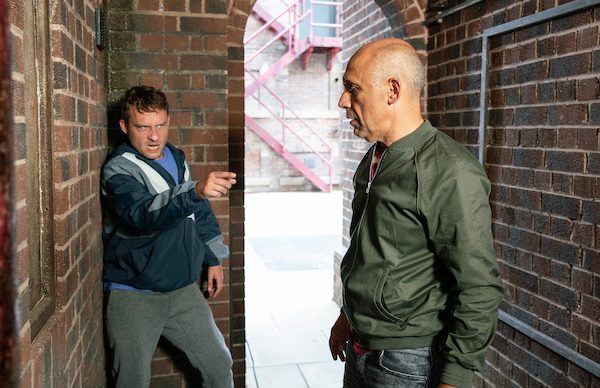 Will the police find out who put Kel in a coma?

There’s drama ahead for Coronation Street’s Paul as a fight breaks out between him and Kel, leading to life-changing consequences.

With the reality of the sexual abuse that he was subjected to all those years ago still weighing heavily on his mind, Paul goes to stay at Billy’s next week in a bid to clear his head.

But having seen the photo of him with Kel back when he was a teenager, Paul can’t get the fact that he was so young out of his head and decides to confront his mum’s partner face-to-face.

Heading to Number 5 to show Kel the picture, Paul tells Kel that Billy thinks he is the victim of sexual grooming… but of course Kel quickly laughs off Billy’s claims and is soon manipulating Paul once again.

He tells Paul that Billy is wrong because they loved each other back then, and urges Paul to go back to Billy and tell him that nothing happened between them.

Paul knows deep down that Kel is trying to wriggle out of trouble and goes to the pub to drown his sorrows. But when Billy finds him and tries to get him to open up, he refuses, clamming up once again.

However, Paul’s not in a good place and later when he sees Kel in the ginnel he confronts him about what happened between them all that time ago, and tries to kiss him for old time’s sake.

But when Kel pushes him away in horror, the reality that Kel only fancied him when he was a young boy suddenly hits Paul and he lashes out, punching Kel and knocking him unconscious.

Paul’s terrified by what he has done and races away, leaving an unresponsive Kel alone in the alley, but when he gets home Gemma spots his bleeding knuckles and Paul’s forced to lie that he caught his hand in the van door.

Kel is soon found and raced to hospital, leaving Paul with no option but to admit to his sister that he was the one who left Kel in a coma.

But while Gemma might agree to keep his secret, will Bernie do the same?

As Paul opens up to Billy that he has left Kel on the brink of death, Billy pleads with his ex to go to the police and confess his crime, but also explain why it happened and that Kel abused him when he was younger.

But it is all too much for Paul to handle and he can’t face reporting Kel because it would bring up everything that happened in his past.

However, back in the hospital Kel is recovering from his bleed to the brain and the police don’t waste any time quizzing him about his attack.

But Kel is adamant that he doesn’t want to grass up Bernie’s son and lies that it was a random attack by strangers… but is he protecting Paul, or himself?

Bernie is determined to find out what Kel and Paul were fighting about, and desperate to keep his dark past a secret, Kel lies that he made a homophobic jibe that caused Paul to lash out. But Paul is then left humiliated further when Bernie makes him apologise to Kel for hitting him.

Kel threatens Paul telling him that if he breathes a word about their past to anyone then he will go to the police about the attack, but Paul’s had enough and packs his bags, heading to the tram station.

But when Summer sees Paul making a quick exit she begs him not to leave without speaking to Billy first.

As Paul breaks down in the vicar’s arms, will Billy be able to persuade Paul to stay in Coronation Street where he belongs?

Do you think Paul will leave? Leave us a comment on our Facebook page @EntertainmentDailyFix and let us know what you think!