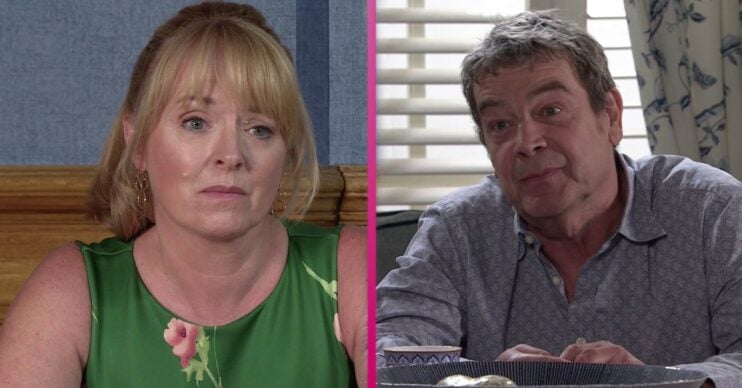 Coronation Street SPOILERS: Johnny to leave as Jenny moves on?

Will Johnny leave for good?

Coronation Street spoilers reveal Jenny moves on with Leo, leading Johnny to make a big decision about his life.

In next week’s scenes Leo calls at the Rovers with a bunch of flowers. But as he approaches the bar, he overhears Jenny telling Daisy that she’s enjoying her freedom and is done with relationships.

Later Daisy admires Leo’s flowers and starts to admit that it might be worth giving him a chance.

Daisy soon realises they came with a card and points out the blooms were meant for Jenny, not her.

She realises Leo must fancy Jenny.

Jenny is flattered when Leo invites her out for a drink.

Meanwhile Johnny tells Carla he feels as if his life has lost purpose and is thrilled when she offers him a consultancy job at the factory.

But as he chats to an old business contact with Carla at the Bistro, he is shocked to see a glammed up Jenny walk in with Leo.

Leo flirts with Jenny, telling her he finds her much more attractive than Daisy.

Later Johnny calls at the Rovers, hoping to have a drink with with ex wife Jenny, only to find her entertaining Leo.

After spending a night with Jenny, a loved-up Leo sets off to work and Beth watches intrigued.

In the factory, Johnny overhears Beth slagging him off to Carla, suggesting he’s past it and not up to the job.

Later Carla finds Johnny in the Rovers nursing his pint. Johnny tells her that Beth’s right and she doesn’t need his help running the factory.

He says it’s time he set off for pastures new. Is Johnny leaving Weatherfield for good?