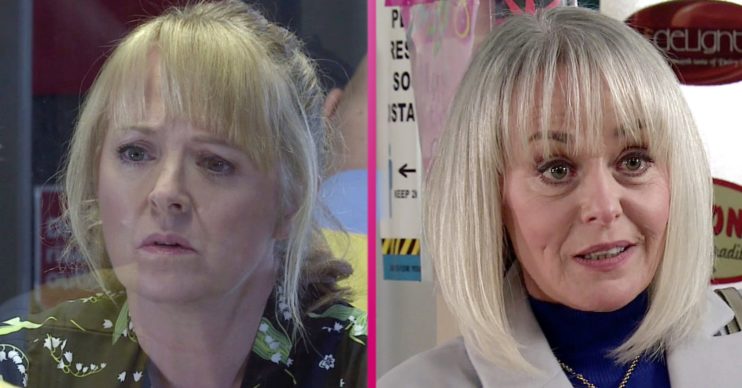 Coronation Street spoilers reveal Jenny sees Sharon outside of the prison. Is she about to discover her secret?

It was recently revealed Sharon Bentley is the aunt of drug dealer Harvey. Harvey is set on finding Leanne and Simon to get revenge on Leanne for reporting him to the police.

In tonight’s scenes of the ITV soap (Friday, April 30) Sharon tells Sam that Simon’s dad has gone into hospital for a liver transplant and he ought to message Nick so he can let Simon know.

Meanwhile in the hideout, Nick admits that Sam’s been in touch to let them know that Peter is having a liver transplant.

But what they don’t know is Simon is listening from the door. Later Leanne knocks on Simon’s bedroom door, but to her horror she discovers he’s gone.

Soon Simon turns up at the hospital, shocking Peter and Carla.

Meanwhile Sharon goes to the prison. But when she runs into Jenny, who is going to see her husband Johnny, she panics.

She lies to Jenny making out that she’s mentoring one of the prisoners. But will Jenny buy it?

At the hospital Simon announces he’s not going back to the hideout, meanwhile Leanne is worried Harvey’s gang have got him.

Peter and Carla persuade Simon to go, but as he makes to leave Peter overhears the cleaner on his phone, reporting Simon’s whereabouts.

The cleaner punches Peter and Simon makes a run for it.

Simon returns to the hideout and admits that he nearly got caught. The transplant coordinator explains to Peter and Carla that as a result of his head injury they’re going to keep him in for a couple of nights.

Soon Sharon take a call and is furious to hear that Simon has done a runner.

But has Jenny figured out the truth?