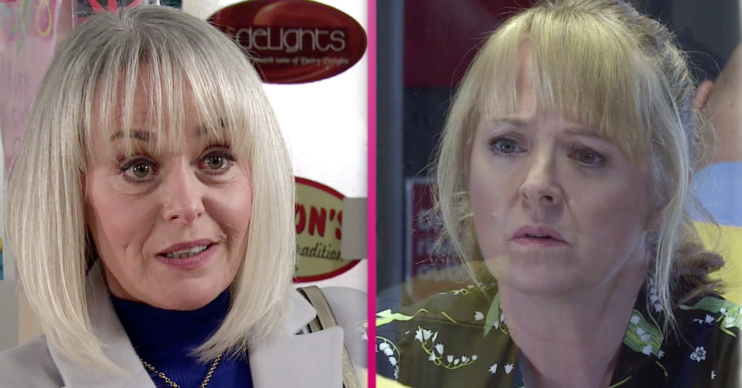 Has Jenny bitten off more than she can chew with Sharon?

Coronation Street is lining up a terrifying showdown for Jenny Connor and villain Sharon Bentley.

The Rovers landlady is suspicious about her foster sister’s motives – and viewers know she’s right.

Corrie fans are aware that Sharon is on the cobbles at the behest of her drug dealer nephew Harvey – and is using her connections to try to free him from prison.

Sally Ann teased on This Morning: “It’s quite terrifying, particularly with some of the things we’ve been doing recently, that air in a couple of weeks’ time.

“Give me an eight-page monologue, I’m happy. Don’t give me any action, I’m not Tom Cruise!”

Sally Ann has previously teased the epic showdown between the two foster daughters of Rita Tanner.

She told ED!: “Jenny turns into Weatherfield’s answer to Angela Lansbury pulling pints and that’s the opening titles instead of a typewriter, on the trail.

“Like Jenny from Gogglebox with notes about what Sharon’s done.”

She added: “I did actually tweet last week. I said I was having the campest day I’ve ever had at work and to thank (Coronation Street writer) Jonathan Harvey.

“It is brilliant so anything with Tracie is just a joy to do. We work really well together and it’s hysterical.

“It’s so soapy but so unique.”

Could someone die in the action scenes? It seems unlikely as Sharon may be sticking around.

However, Sharon actress Tracie Bennett has hinted that Sharon could be redeemed enough to stick around on the cobbles.

“It’s beyond my control,” she told ED! and other press.

“It’s, ‘Is she available? Do you want to stay? Do we want her?’ There’s all these factors coming into it,” she said.

“There are things, but they’re talking. It’s up to them. They’ve expressed that, yes, so it’s one of those.

“If the public hate me and I’m the most hated person in Britain, then they might think: ‘Actually nobody likes you Trace, so you’re going’.

“I’d be fine with that because they know it’s acting and all that. You just don’t know how it moulds together, do you?”