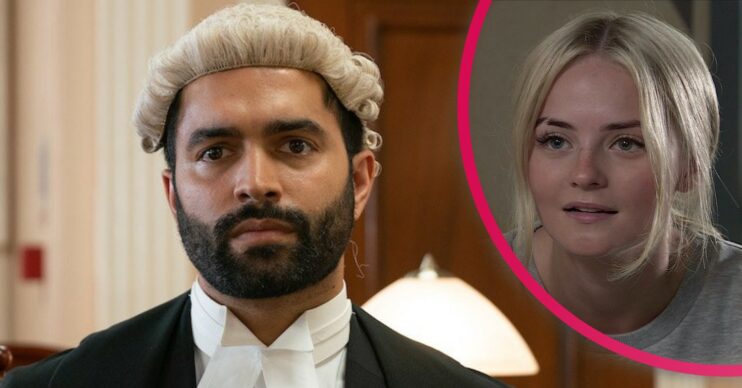 Coronation Street SPOILERS: Imran’s ex is back – with a dark secret!

What has she got to do with Kelly’s court case?

Coronation Street spoilers for next week reveal a shock for Imran when his ex-wife Sabeen returns with a bombshell secret.

The stunned solicitor can’t believe it when colleague Adam tells him Sabeen is waiting in the Bistro for him.

But there are more surprises to come when Sabeen reveals the real reason that she’s back in Weatherfield.

What will Imran’s next move be?

It’s been a while since Imran has run into his ex-wife.

He’s been happily shacked up with Toyah and barely given Sabeen a second thought.

But that’s all going to change when Sabeen reveals she’s one of the barristers working on Corey’s expense legal defence team.

Imran’s horrified to realise that he and Sabeen will be fighting each other in court and that he’s the underdog.

Corey and Kelly have both spent weeks blaming each other for Seb’s horrific murder.

But Imran firmly believes he’s defending the innocent party and will do whatever it takes to free Kelly.

So, when Sabeen suggests they ask the court to take Corey and Kelly’s young ages into account, Imran agrees.

Imran demands the trial be delayed following the leak, much to grieving Abi’s horror.

She accuses him of deliberately slowing down the trial, and Toyah is stunned when he admits that he’s doing just that.

She tries to get her head around Imran’s determination to win the case at any cost, but Imran is unrepentant.

Later, at a pre-trial hearing, Imran fronts up to Sabeen with new evidence about the blood splatters on Kelly’s trainers and what they say about the incident.

He’s maintained Kelly’s innocence from day one, but Imran is shaken when there’s an offer to reduce the plea to manslaughter if they agree to plead guilty.

Will he advise Kelly to take the offer or fight to clear her name?