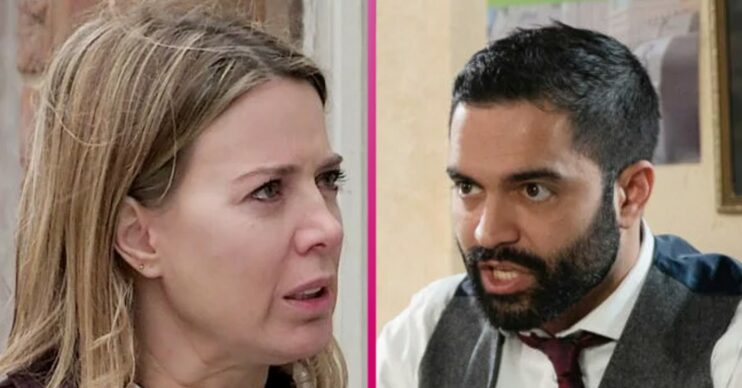 Will she lose everything?

Coronation Street spoilers for next week reveal Imran gets the proof he needs to win his custody case and get rid of Abi for good.

But knowing all is not as it seems, will he really use it?

Could Abi be about to lose everything in Corrie?

Imran and Abi are locked in a nasty custody battle. Imran and Toyah are presenting a united family front with a happy home life for his son, whereas Abi is facing an uphill struggle to prove herself.

After Imran and Toyah’s wedding very nearly goes very wrong when Abi kidnaps the bride, the couple eventually say ‘I do’.

After the ceremony, Imran confronts Abi in the street over her actions. He tells her she’s an unfit mother and makes it clear he’ll do all he can to keep Alfie away from her.

Abi, meanwhile, is fuming Imran’s been having her followed and is determined not to give up.

She’s given a boost when her solicitor’s fees are paid by a mysterious benefactor. She also finds an unlikely friend in Kelly, who begs Imran not to take another child away from Abi.

Her old pal Dean approaches wanting to score some drugs.

Desperate to get rid of him and stay clean, Abi quickly gives him some cash to go away. But she has no idea she’s been seen…

Imran’s PI Ben is still following her and he takes pictures of what looks like a drug deal.

He shows the images to Imran and offers to lie in court and say he saw drugs changing hands. But what will Ben want in return?

What will Imran do in Coronation Street spoilers?

Will Imran stoop so low?

He knows this is the evidence he needs nail Abi and get rid of her for good. But will he use it?

Is Abi about to lose everything?

She later visits her son in the neonatal unit, but is this the last time she’ll see him?