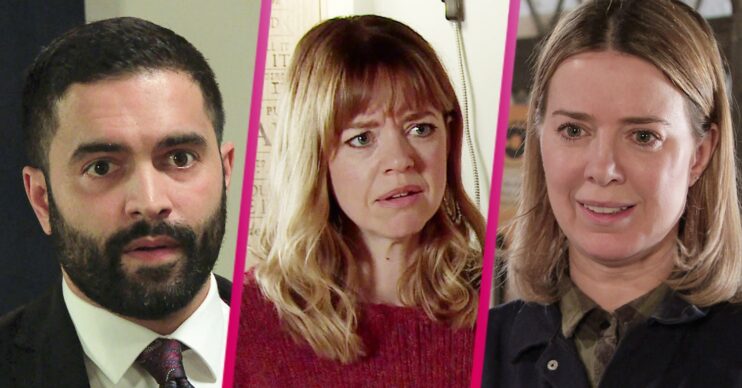 Coronation Street SPOILERS: Imran and Toyah to take Abi’s baby now the truth is out?

Coronation Street’s Toyah was shocked to find out her fiancée Imran is the father of Abi’s son Alfie in tonight’s episode (Friday, April 1), but what does this mean for the couple?

Abi gave birth to her son a few weeks ago, unaware she was pregnant. She told Imran he’s the father and they kept it secret, but Toyah finally found out the truth tonight.

What does this mean for Toyah and Imran now?

Viewers now that Abi and Imran slept together last year after Corey was found not guilty of Seb’s murder.

Imran eventually told Toyah he cheated on her, but not who with. Meanwhile Kevin found out Abi cheated after overhearing a phone call.

In tonight’s episode Toyah was suspicious of Abi’s behaviour and told Kevin she suspected she was back on drugs.

He went over to her flat to drop some of her belongings off.

While Abi made them a hot drink, Kevin went through a package in her bag and found Alfie’s birth certificate stating Imran is the father.

Read more: Georgia Taylor in Coronation Street: Is she married? Is she related to Harriet Bibby?

Meanwhile Imran was waiting for Toyah to arrive to the meeting with Elsie’s social worker so they could discuss adopting the little girl.

When Toyah arrived it was clear something was bothering her and soon she told the social worker that Imran had fathered a child with Abi, calling him a liar and a cheat.

It turned out Kevin had sent her a picture of the birth certificate.

Toyah was devastated and said she didn’t want Imran to hurt Elsie like he had hurt her and was no longer sure about adopting.

Later Imran returned home and as he went to read Elsie a bedtime story, Toyah broke down in tears. But what is next for the couple?

Will they break up or could they end up taking custody of Alfie?

In next week’s scenes Toyah tries to come to terms with the news about Abi and Imran.

She realises she has some decisions to make about Elsie’s adoption.

Later Abi is surprised to find Toyah in the neonatal unit gazing at baby Alfie in his incubator.

Why is she there? Have she and Imran agreed to raise the baby together?

Soon Imran says an emotional goodbye to Elsie before telling Abi he will help her fight to keep her son.

Toyah comes along and reveals social services have reported him to the Solicitors’ Regulation Authority for his involvement in Abi’s custody battle.

What does this mean for Imran?