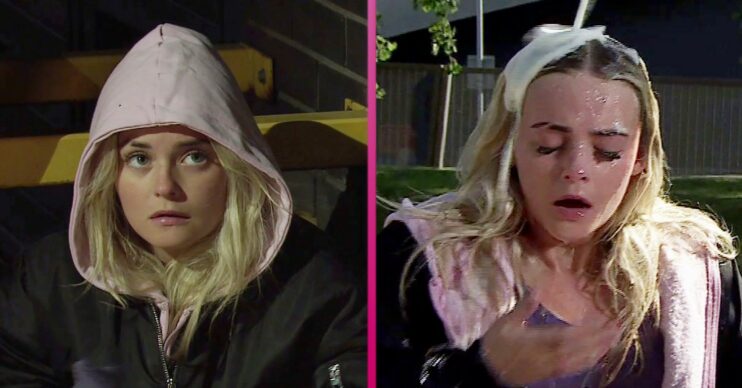 She's trying to cope with life on the streets

Things go from bad to worse next week for Kelly Neelan in Coronation Street.

The teenager has already found herself homeless after being released from prison after it was proved she didn’t kill Seb Franklin.

She was originally placed back with Imran and Toyah but social services insisted she and their other foster daughter Elsie couldn’t live together, so Kelly chose to go to a hostel.

In the hostel she was terrorised by a drug dealer and forced to leave.

Then she was offered a place with the Alahans but her guilt made her turn it down.

Now homeless and living on the streets Kelly has come under the protection of Stu.

However he doesn’t know how she was involved in Seb’s murder.

And when he talks about his role in getting killer Corey Brent sent down – Kelly doesn’t know what to do.

But in an effort to hide her shameful secret, she runs away.

Unfortunately she ends up running into drugs gang runner Jacob – who offers her a free sample of his illegal wares.

At first she turns him down but later when she’s left alone – she changes her mind.

Stu finds her half comatose on the street and tries to help.

But when she rushes off again – she finds herself in a terrifying situation.

Out of it and unable to defend herself Kelly finds herself surrounded by a gang of thugs.

They torment her and pour drinks over her.

However as Kelly is subject to the attack in the park, Nina Lucas finds her.

Pushing aside her fears of what happened last time she tried to save Kelly from a gang – Nina has a decision to make.

Will she save Kelly? Or will she leave her to be attacked?