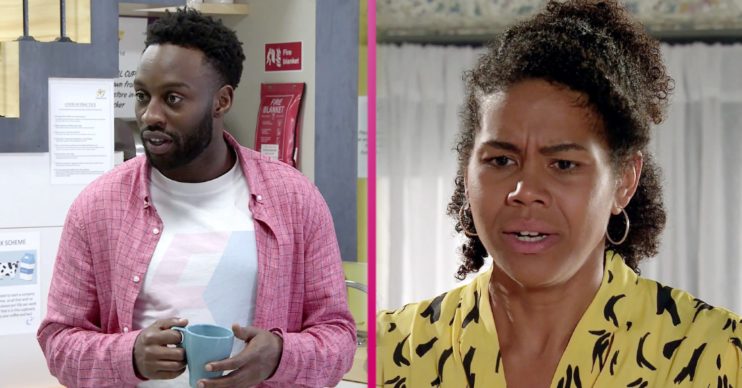 Grace lied to Michael for months!

Coronation Street spoilers reveal Grace comes back to the cobbles tonight (Friday, October 2) after it was revealed she isn’t Tianna’s mother.

Earlier this week Michael discovered the little girl he believed was his daughter wasn’t his child. But she wasn’t Grace’s child either.

It turns out Grace was her nanny and she had tricked her boyfriend into believing they were Tianna’s parents.

In tonight’s episode Grace comes back to the Street and tells Michael how sorry she is for all the hurt she’s caused.

She tells him that she loves him and suggests they move to Spain together for a fresh start.

What will Michael say?

Coronation Street: Grace and Michael’s past

Actress Kate Spencer, who plays Grace, explained to Entertainment Daily and other media, that Grace was pregnant with Michael’s child before their time on the cobbles.

However when Michael found out, he freaked out and left Grace before eventually returning. But Grace told Michael she didn’t want him in her or their child’s life and sent him packing.

But what Michael didn’t know is that Grace had a miscarriage. She soon went on to become a nanny for little Tianna and when she ran into Michael, he assumed Tianna was his child.

Coronation Street: Why did Grace lie about being Tianna’s mum?

Explaining Grace’s lie, Kate said: “She was really really hurt. She found out she was pregnant, she was going to have this whole life with him, them together with a baby, and he disappeared and I think that absolutely broke her.

“It wasn’t planned at all, she didn’t really think she was going to see him again. She lost her baby that she was carrying and she had an absolute breakdown.”

Kate then continued to explain after Grace miscarried she was distraught and blamed Michael for her hurt.

She added: “And then I think she thinks back to the hurt and everything that she went through at that time. He didn’t have to go through that and that wasn’t his fault because she didn’t tell him.

Read More: Pregnant Helen Flanagan misses ‘everything about Corrie’ and ‘would love’ to go back

“But I think her immediate gut reaction is that ‘I was hurt, he needs to feel hurt as well because it isn’t fair for just her to feel it.’ And that’s where I think it kind of came from. She needed someone to blame and she didn’t want to blame herself. There was no one else.”